Canadian newspapers and schools do little to foster interest in journalism among youth. Hong Kong has taken a radically different approach. 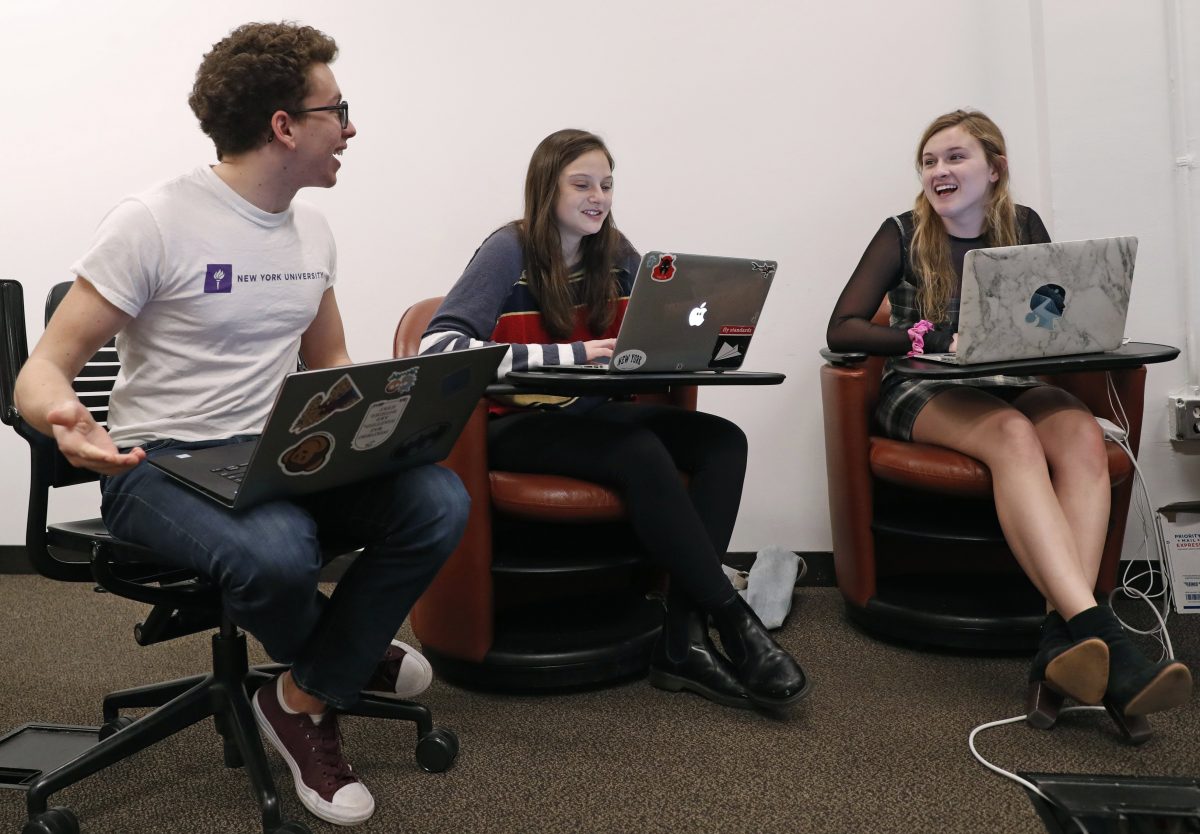 Students talk during an editorial board meeting at a student-run newspaper. (AP Photo/Kathy Willens)

If you’re a Canadian teenager interested in learning about journalism, your options are scarce.

Most Canadian high schools don’t have a student newspaper, the ones that do are in free fall and there are few initiatives to cultivate a passion for news in Canada’s youth.

During a recent trip to Hong Kong, I was amazed to learn about some initiatives that Hong Kong newspapers have taken to educate students, raise them up with opportunity and reap the rewards of their engagement.

Canada’s schools and newspapers should adopt similar initiatives to foster a future generation of news readers and writers.

Baruch Zohar is the teacher in charge of North Toronto Collegiate Institute’s award-winning school paper, Graffiti. “The weakening of school paper engagement in my 20 years of involvement has been significant,” Zohar said.

“We get as many kids as ever who are heavily involved in the paper, who are full-time members of the editorial team. But we have fewer students outside of this core group who contribute to the paper as writers.”

Zohar has noticed a decline in reader interest. “What makes our school special is that the paper is distributed to every student on the days that it comes out, and the students are given 20 minutes to read it,” he said.

“It used to be that almost every kid spent the whole time reading. Increasingly, students are showing a lack of interest. The number of teachers who read the articles and speak to me about them is also decreasing noticeably.”

“There are several schools that have historically had amazing newspapers but that have stopped publishing altogether,” Zohar said.

“Great newspapers are still produced, but there are fewer schools that come back with great papers year after year. A big reason for this is the challenge of getting staff advisors who stay with the paper year after year. Getting principals to swallow the cost of printing is also tough. Digital papers don’t get the same number of readers or writers.”

Outside of school newspapers — and many schools don’t even have those — it is difficult for youth to find opportunities to contribute to media publications or receive training from someone who works at one, at least until they reach university.

Brent Jolly, vice president of the Canadian Association of Journalists, calls high school journalism an “under-served market” that not a lot of news organizations have tapped into, likely because of labour concerns and quality control.

“It’s a real challenge to tap into that market because there are only so many resources available in terms of people who are actually producing the news,” he said.

Jolly cited the only instance I could find of a Canadian publication offering column inches to students. He said his mentor used to write for an after-school column called After 4, which was run in the now defunct Toronto Telegram “way back when.”

What Canada lacks in journalism opportunities for students, it tries to make up for in media literacy programs for elementary and secondary students.

Just Think: Teaching Critical Thinking with Newspapers is a curriculum guide created by News Media Canada (NMC), a trade association representing more than 830 publications across the county. The guide is a series of lesson plans and rubrics centred around teaching with newspapers.

It is unclear how widely adopted the curriculum is, and NMC did not respond to my inquiry. I can say from experience, though, that I never received the benefit of the guide in all my years of primary, middle and secondary school.

Another potential avenue to teach media literacy is News in Education, a global program to promote the use of newspapers in the classroom. Teachers need only apply online to receive free digital subscriptions to local publications for educational purposes.

But last fall, Postmedia, Canada’s largest media company with more than 140 brands, pulled out of the program. A company spokesperson said the move was to comply with cannabis advertising laws, which prohibit the drug from being advertised to minors.

Given the gruelling challenges today’s media companies face, it’s not surprising that a company, when forced to choose, would opt for ad revenue over an opportunity to shape the minds of youth.

In 2019, the Canadian government rolled out a new tax break for digital news subscribers in Canada. Canadians can now claim an annual 15% tax credit on up to $500 in costs, for a maximum credit of $75 for digital subscriptions (discounting broadcast news). This is a much-needed incentive to get more families reading the paper.

But it’s far from clear it will provide children with the push they need to get into serious journalism.

While many papers have experimented with selective paywall removal — including the Toronto Star, which made a temporary free digital subscription available to students in advance of the federal election — most big-name dailies prefer to charge for online content.

In June, during a trip to Hong Kong with my international journalism class, I had the opportunity to tour Hong Kong’s paper of record, the South China Morning Post (SCMP). We were able to pick the brain of Susan Ramsay, editor of the Young Post, SCMP’s student paper.

Ramsay told us that in Hong Kong, a portion of every high schooler’s tuition fees goes toward a subscription to the Young Post. Ramsay says this gets Hong Kongers engaged with newspapers at a young age and often for life. She says students all over the city contribute to the award-winning paper and that journalism is a part of every high school student’s life.

Their youth have reporting opportunities.

Beyond that, the Young Post has devoted resources to creating a free, first-hand journalism experience factory. The Junior Reporters Club is a global network of journalists and journalism-hopefuls aged 12-21 who are provided with reporting opportunities and workshops at no cost.

SCMP recently eliminated its online paywall, so everyone can now access its reporting.

Undoubtedly there are numerous factors that account for these sizeable discrepancies. But it stands to reason that efforts to encourage people to read and write news when they’re young will affect their habits as adults.

Ben Cohen is a fourth-year journalism student at Ryerson University and a reporting intern at The Globe and Mail. You can follow him on Twitter @cenbrohen.