President Emmanuel Macron wants to restore France’s grandeur. But will the gestures of his first two months in power lead to concrete results? 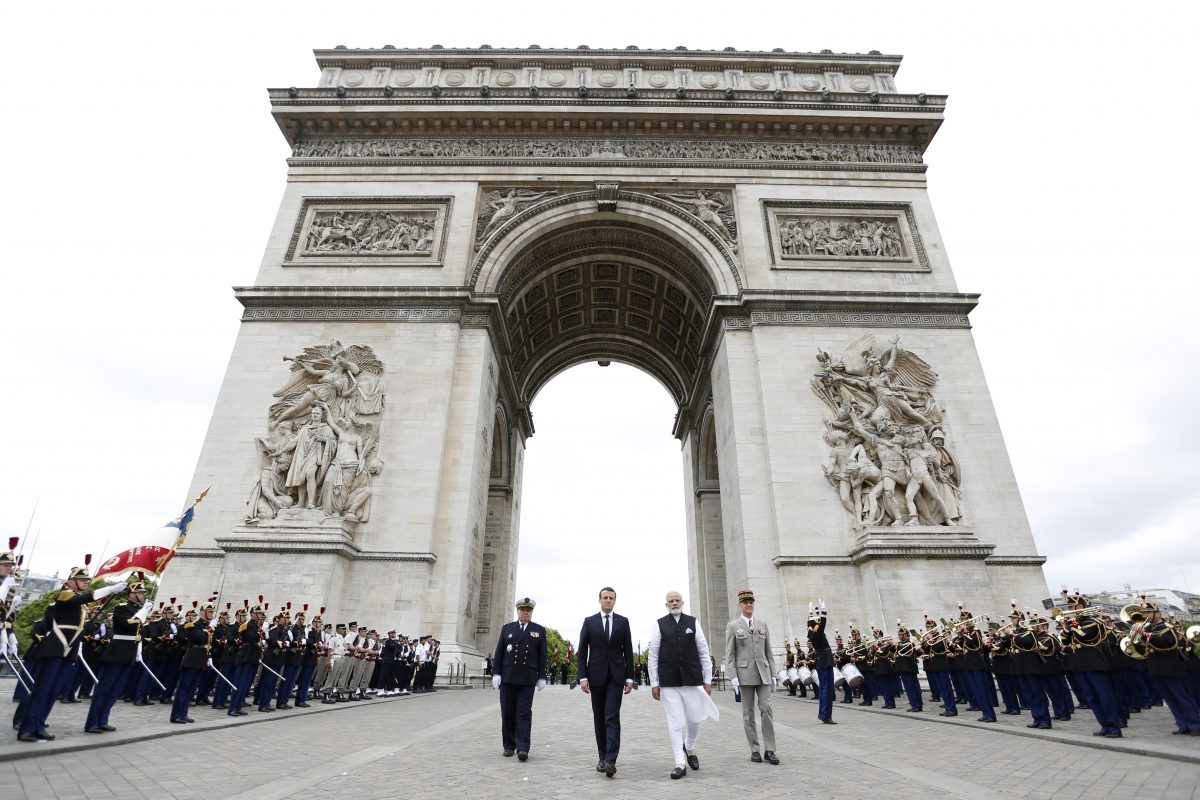 France’s new president, Emmanuel Macron, has appropriated some of his country’s most iconic, grandiose symbols as he maneuvers to reaffirm his country’s role as a major global power and fill a void left by a retreating Britain and an isolationist United States.

“The world and Europe need a strong France with a sense of its own destiny,” France’s youngest leader since Napoleon declared in his inauguration speech on May 14 at the Élysée Palace.

During the pomp and circumstance of France’s Bastille Day parade earlier this month, Macron stood side-by-side with Trump on the fabled Champs-Élysées avenue. He greeted Putin at the Versailles Palace, a symbol of French monarchical power and former majesty. For Modi, it was the Arc de Triomphe.

The night he won the election, Macron walked solemnly by himself through the Louvre courtyard, on camera every step of the way, to a gathering of supporters. A week later at his inauguration, he stood under the rain at the Tomb of the Unknown Soldier, without coat or umbrella, to pay homage to France’s victims of war.

The imagery aimed to burnish his credentials as a youthful centrist, above partisan politics, determined to restore his nation’s greatness.

No normal president, Macron looks to the Roman god Jupiter.

Lost on no one, the symbolism matches Macron’s determination to turn the page on his unpopular predecessor, François Hollande, who had vowed to be a “normal” president. Macron, for his part, likens his role as head of state to that of Jupiter — the Roman king of the gods who ruled from above.

“I don’t believe in a ‘normal’ president,” Macron told business magazine Challenges last October. “I think the president of contemporary, democratic France needs to be someone who leads society by the force of his convictions and actions, and offers clear direction.”

Macron’s association with Jupiter demonstrates a skillful use of symbolism, according to linguistics professor Julien Longhi of the University of Cergy-Pontoise. “Jupiter is the god of the gods, the one who commands. Emmanuel Macron gains nobility while avoiding political jargon.”

Speaking of Macron’s “Jupiter” style, Gérard Courtois, the editorial chief at Le Monde newspaper, said: “Long before he was a presidential candidate, he philosophized on the vacuum created by the functioning of our democracy, the absence of the ‘figure of the king.’ He is now working to fill it.”

Macron is trying to position himself as heir to two French presidents — Charles de Gaulle and François Mitterrand — who also draped themselves in symbols and sought to stay above the fray while promoting national autonomy. They demonstrated “an ability to enunciate a meaning and a sense of direction anchored in the history of the French people,” the new president has said.

Riding a wave of popularity and France’s strong standing

Macron is being helped by some favorable winds.

France now is the world’s leading “soft power,” having leaped ahead of the United States and Britain in an international ranking of countries’ ability to harness global alliances and influence other nations through an appeal that does not rely on military or economic might.

“Elected on a pro-Europe platform of reform, the president is riding a wave of both domestic and international popularity,” the report by PR firm Portland Communications and the University of Southern California’s Center on Public Diplomacy said.

The report noted that the United States and Britain fell back in the 2017 rankings following the election of Trump, who has shunned alliances in favor of a go-it-alone approach, and Britain’s vote to leave the European Union.

The deteriorating international image of the United States under Trump may give Macron some running room. In a recent poll across 37 nations, the Pew Research Center found that a median of 22 percent of the respondents had confidence in Trump to do the right thing when it comes to international affairs. That was down from 64 percent at the end of Barack Obama’s presidency.

“A more dynamic and energized France”

In the presidential campaign that preceded the clinching of a comfortable parliamentary majority, the new president nailed his colors to the EU mast, vowing to reform and strengthen the world’s biggest trading bloc.

After populist, anti-EU parties lost ground in several European votes, the mood on the continent has turned more pro-Brussels, according to another Pew poll, that found that a median of only 18 percent in nine continental EU nations wanted their own country to leave the EU.

Even Macron’s plan to strengthen Europe’s security defenses faces a more favorable environment: another Pew survey found that the image of the North Atlantic Treaty Organization has improved on both sides of the Atlantic.

His to-do list includes reviving the Franco-German power axis, making it the EU’s driving force in the wake of Brexit, and applying sanctions against countries that do not respect the social and environmental clauses of EU trade agreements.

“What emerges from these reforms will likely be a more dynamic and energized France that plays a leading role in the EU and perhaps shows greater global leadership overall,” the Soft Power 30 report predicted.

“Ordinary French” will end up having their say.

But even at this early stage, all is not rosy for Macron. Political adversaries to his left boycotted his address to a joint session of the two houses of parliament, saying his choice of venues — the resplendent Versailles palace — was an unfortunate reminder of a cruel monarchy that was overthrown by the French Revolution.

“Success on the international scene is a positive asset, but it does not mean Macron doesn’t need to get results on the national playground,” Lecerf said.

Indeed, Macron’s popularity among French voters fell 10 points this month to 54 percent, the biggest drop for a new president in more than 20 years, according to an Ifop poll published on July 23.

The polling firm cited Macron’s row over military spending cuts with an Army general and the president’s decision to press ahead with tax cuts in 2018 while reducing housing benefits.