The long shadow of Srebrenica still falls on Bosnia

Years after Europe’s worst atrocity since World War Two, Bosnia is split by ethnic divisions and questions persist about how to prevent such tragedies. 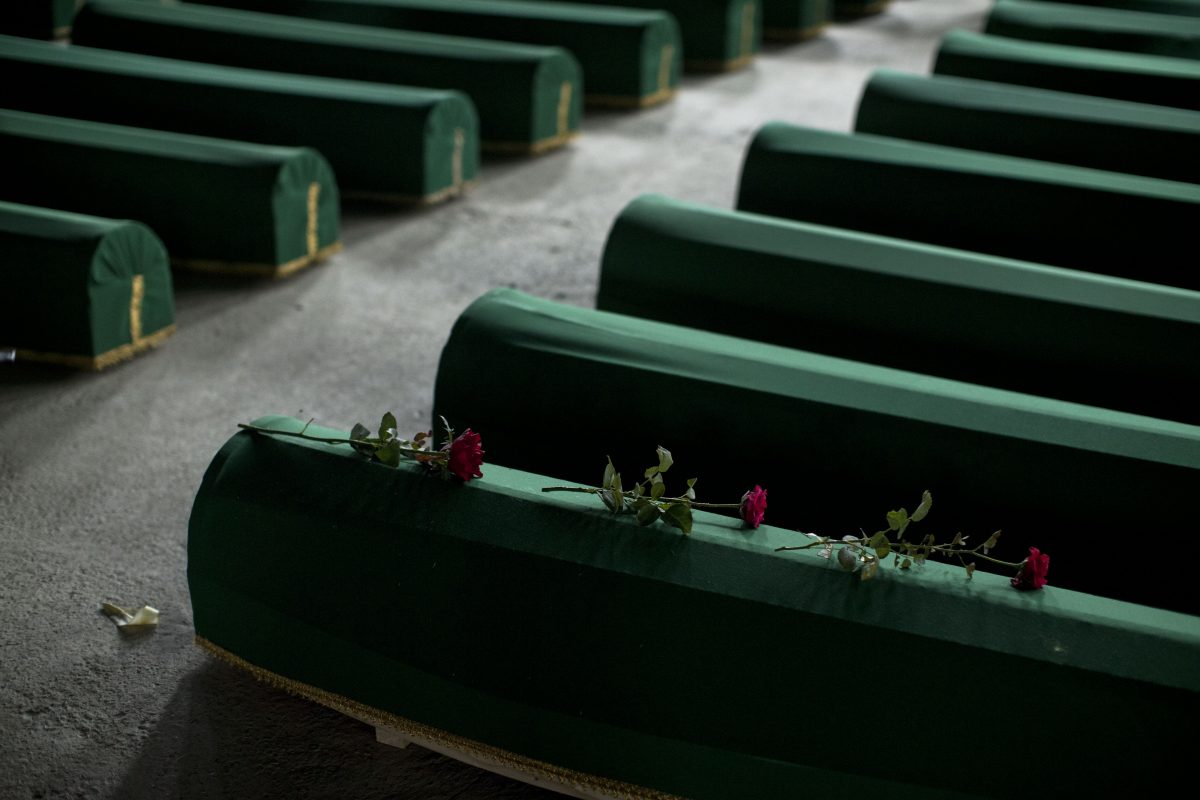 Three roses are laid on a coffin of a victim of the Srebrenica massacre, 9 July 2015. (AP Photo/Marko Drobnjakovic)

The massacre of more than 7,000 Bosnian Muslims on European soil 20 years ago continues to cast a long shadow over the continent and beyond.

In 1995, after a three-year siege on the Bosnian capital of Sarajevo, Serb forces entered the town of Srebenica — a designated “safe area” under the protection of United Nations peacekeepers.

The war in multi-ethnic Bosnia-Herzegovina, which killed an estimated 100,000 people, broke out in 1992 after the republic declared its independence from Serb-dominated Yugoslavia.

Under a policy of “ethnic cleansing,” Serbian and local Serb forces went on the warpath to secure territory with majority Serb populations.

Some 160 lightly armed Dutch peacekeepers were forced to stand by as hundreds of heavily-armed Serb troops entered Srebrenica.

With their call for air strikes refused, the Dutch handed over several thousand Muslims sheltering in their base in exchange for 14 Dutch peacekeepers who had been taken hostage.

Two decades later, the situation in Bosnia-Herzegovina is the subject of a gloomy report by the European Commission, which is looking into the possibility of the country joining the Union.

The country remains largely divided along ethnic lines, with Muslims, known as Bosniaks, in an uneasy partnership with local Croats in one entity while Bosnian Serbs run a separate republic with their own president and government.

The report said the resulting political paralysis meant there was little popular will for much-needed structural and economic reforms.

Despite a Supreme Court ruling banning segregation in education last year, schools are notable examples of such division along ethnic lines.

More than 50 secondary schools exist as “two schools under one roof,” with pupils from the Bosniak and Croat communities studying and playing separately.

The country’s bloody history and present fragile state have made it an easy target for recruiters from Islamic State fighting in Syria and Iraq.

The jihadists issued a new 20-minute video last month aimed at Bosnia-Herzegovina, urging young Muslims to join the holy war in the Middle East or attack state structures at home.

Some 200 Bosnians are reported to have left to join the battle in Syria, including women and children, and around 50 are believed to have returned to the country, representing a threat to local security authorities.

The Srebrenica anniversary has awakened bad memories for the Dutch.

Last year, a district court in The Hague ruled that their U.N. peacekeepers were responsible for the deaths of 300 Muslim men who had sought protection at the U.N. base.

The court stated that the troops should have been aware of the risk posed to these men when handed over to Serb forces.

But it deemed they were not responsible for the deaths of some 7,000 men who fled the compound and were killed by Serb forces in the mountains and woods surrounding the town.

As for the U.N., complaints that its peacekeepers in Srebrenica lacked a strong enough mandate to take on hostile and heavily-armed forces have resurfaced on several occasions since, including in the 1996 Rwandan genocide and at the end of the Sri Lankan civil war in 2009.

More recently the U.N. was accused of failing to halt what was widely seen as genocide by troops of the Arab-led Sudanese government against a rebellion started in 2003 by non-Arab tribes in the south of the country in which some 300,000 people died, from war or disease.

With armed militias in global conflict zones increasingly gaining access to advanced weapons, it remains to be seen whether the Dutch court decision will make it more difficult for the U.N. to recruit peacekeepers in the future.