Bosnia is not lost. Shame on our easy pessimism

It’s easy to dismiss attempts to prosecute war criminals from the conflict in Bosnia. But the efforts are not in vain despite an imperfect peace. 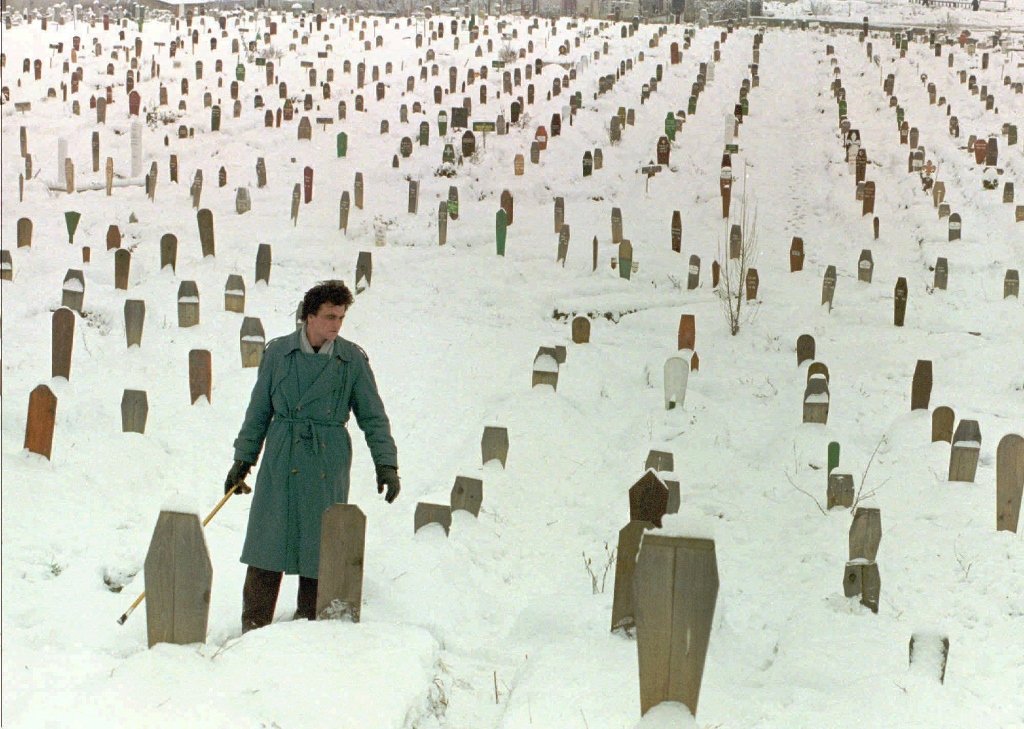 A man pauses in a Sarajevo cemetery after visiting the graves of his two sons killed at the start of the Bosnian war in 1992. 29 December 1995. (AP Photo/Enric Marti)

The International Criminal Tribunal for former Yugoslavia has just wound up 24 years of operations with a grisly fiasco.

At its last session, the Bosnian-Croat warlord Slobodan Praljak committed suicide in the courtroom by drinking poison after his 20-year jail sentence was upheld.

A few days earlier, the Bosnian Serb ex-general Ratko Mladić was dragged from the court screaming insults as he was sentenced to life imprisonment for genocide in the Yugoslav war of the 1990s, including the massacre of 8,000 Muslim men and boys in Srebrenica.

Meanwhile, the Dayton agreement of 1995, setting up a Bosniak-Croat Federation and a Bosnian Serb Republic within the unified state of Bosnia-Herzegovina, has not brought the country together politically.

So, with no acknowledgement of justice by the villains, no consolidation of democracy and continuing obstruction by selfish politicians, the international media have hastened to write off the whole peace-making process as a failure.

But it is not.

The court upheld the principle that the rule of law is for everybody.

The International Tribunal did call bullies, fist-bangers and mass murderers to account. It is surely good that Serbian ex-President Slobodan Milošević and the Bosnian Serb leaders Radovan Karadžić and Ratko Mladić were given long sentences, as were a lesser number from other ethnic groups.

The court stood up for the principle that the rule of law is for everybody, worldwide. And it gave voice to large numbers of victims who could testify in public.

Within Bosnia-Herzegovina, politicians still divide bitterly along ethnic lines, but the stirrers tend to be the Bosnian Serbs.

Throughout the Yugoslav conflict, Serbian expansionism was a root cause. Westerners tend to default to a middle-of-the-road opinion that Balkans are all incurably quarrelsome. But this is a facile view. It was mainly the Serbs who pushed to expand, hoping the disintegration of Yugoslavia could lead to a Greater Serbia.

I felt this when I went into northern Bosnia this summer.

But there were no signs further on indicating I was leaving that territory or entering parts allocated to the Bosniak-Croat federation. That is because Dayton forbids any formal delimitation of the territories on the ground.

In practice, the signs for “Republika Srpska” serve no real purpose – they are nothing more than loud propaganda for ethic Serbs within the state of Bosnia and Herzegovina.

A patchwork of local communities and customs coexisting well enough.

In one part of the Bosniak-Croat area, the black gravestones are typically Croatian, but a bit further on they look Muslim, as do the names on shops. The Muslim, or Bosniak, part is more prosperous. I visited a gleaming new factory working overtime to fill international orders for its polished walnut furniture.

All impossibly complex, you may think. But actually this is a patchwork of local communities and customs coexisting well enough at the grass-roots.

Young Bosnian Croats who fled during Serb ethnic cleansing generally did not return since they could integrate into Croatian diasporas in the West. Some older Bosnian Croats, however, do come back.

A friend who lived much of his life in Slovenia has inherited the home of his mother, who was evicted by Bosnian Serbs during the war. After Dayton, the Serbs had to return it to her, and now my friend is building a smart new house nearby.

The countryside is beautiful, and his pension will go much further here than in Slovenia. Food is cheap and delicious, especially the legendary Bosnian plums, as are the slivovitz and the beer.

In a café, I order “Turkish coffee.” My host whispers: “You can’t say that in this place. It’s Serb!” But both he and the waitress chuckle at my discomfiture. “Around here, we get on OK with each other,” he says.

Time CAN heal, and people’s well-being does not necessarily depend on politicians. People can make reconciliation happen quietly on the ground, and in Bosnia-Herzegovina many of them are. Efforts by the international community to facilitate this have therefore not been in vain.

(Read News-Decoder Colin McIntyre’s article on the sentencing of Ratko Mladić — the Butcher of Bosnia — here.)

Marcus Ferrar is a former Reuters correspondent who covered Eastern Europe during the Cold War and Portugal during the 1970s revolution. He has written books about Germany, Eastern Europe and freedom. He is vice-chairman of the Dresden Trust, which furthers reconciliation and friendship between Britain and the city of Dresden.