(All photos by Mindy Tan)

My fascination with Beijing’s hutongs began during the 2008 Olympics.

I was reporting on the Games for a newspaper. A gleaming media bus took the visiting media from venue to venue, with unnaturally blue skies above us and eager volunteers lining roads without traffic.

Through the bus’s windows, I saw welcome banners decorated with child-like mascots named Beibei, Jingjing, Huanhuan, Yingying and Nini, proclaiming, “Beijing welcomes you.” The banners with their adorable, larger-than-life images were all over the place and seemed to cover all of Beijing’s construction sites.

But as I looked closer, I saw people emerging from the edges of the gigantic pin-ups. The banners were there to block entire neighborhoods deemed too poor and too ugly for the world to see!

These are the hutongs (胡同) — narrow labyrinths of crooked houses with courtyards. Part of Beijing’s original city planning, the hutongs were laid out according to cosmological principles during the Yuan Dynasty.

Some homes are centuries old, living testimony of the endurance of Chinese architecture and the structures’ wooden joints. Most lack modern sanitation.

A living relic of China’s past

After Beijing won the right to host the 2008 Summer Olympics, the destruction of hutongs gathered pace to make way for a more modern capital city. The government, property developers and corrupt officials evicted locals who in some cases had lived for generations on prime land near the Imperial Palace.

More recently, with few authentic neighborhoods remaining in Beijing, authorities have ordered the renovation of select hutongs, including the one featured in my photo essay which has turned into a vibrant tourist hub.

For me, these old courtyards are a living relic of China. A China that balances tradition with modernization, a China that is struggling with a middle class dumped in slums while the rich get further and further ahead. That sort of poverty is painfully endearing, and the hutongs are where you can find it.

With these photographs that I took in May, I am trying to capture the spirit of those who still live in hutongs today. To feel, hear and smell simple life, simple gestures between old city walls, as time stands still. 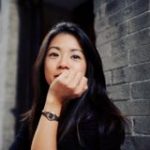 Mindy Tan is a Singapore-based photographer who has won numerous international awards. Currently one of Fujifilm’s X photographers, she worked in the past as a newspaper reporter for Singapore Press Holdings covering foreign labor, youth and community issues in the island nation. She is particularly interested in people living precariously in big cities in Southeast Asia. You can see her work on her website and her Instagram feed.