Decoder: Making sense of Brexit and the Irish backstop

Theresa May is racing to negotiate a Brexit accord that the UK Parliament can support. Our decoder explains why the deal hinges on the Irish backstop. 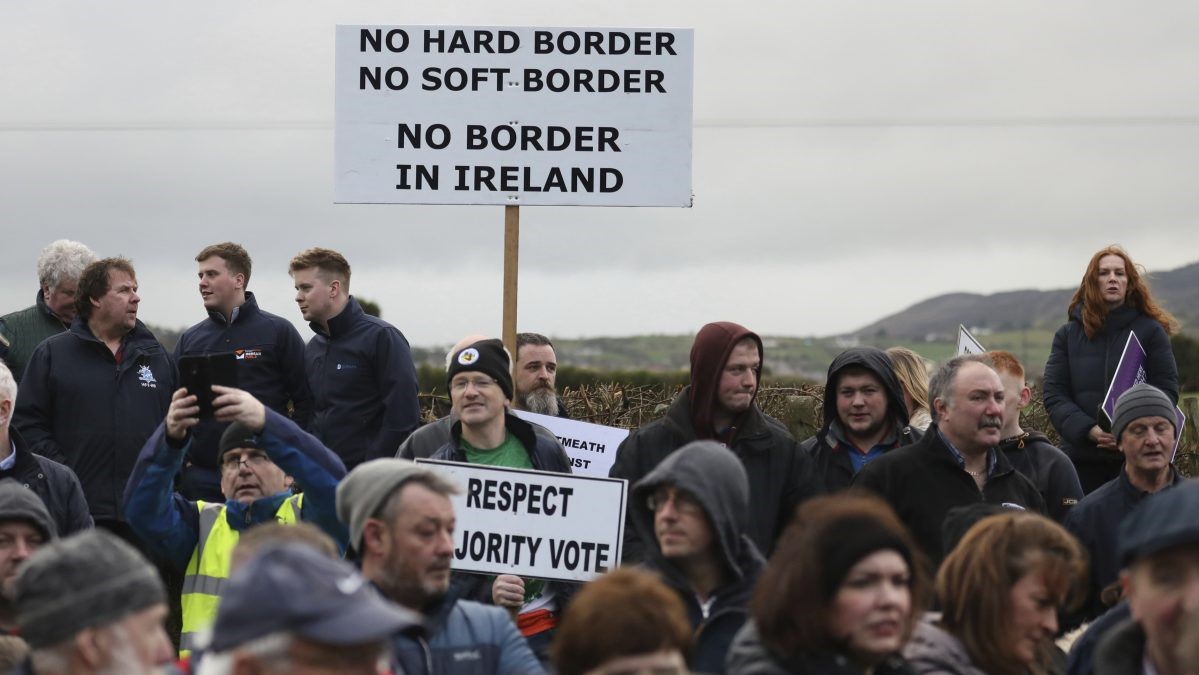 Britain only wanted out of the European Union when it voted for Brexit in June 2016. But it forgot a number of complexities, notably Ireland.

On the fragile border between the Irish Republic and Northern Ireland, the messiness of the UK-EU divorce is most visible.

This border has become the focal point of the Brexit train wreck and one of the key snags in the UK’s efforts to depart from the EU in an orderly fashion next month.

The border is significant because it is the only land border that will separate the UK from the EU, making some border controls on the free flow of goods and people necessary if the UK leaves the EU customs union.

The Irish border has become the focal point of the Brexit trainwreck.

Last November, UK Prime Minister Theresa May and the EU Council agreed on a 600-page withdrawal agreement governing the UK’s exit from the EU, set for March 29. The agreement touches on the UK’s eventual departure from the EU market and customs union, the movement of workers and its relationship with the European Court of Justice.

Importantly, the agreement also provides that post-Brexit rules for trade across the Irish border would be settled in a later contract, which is not yet in sight. European negotiators had insisted that the agreement include this “backstop,” or safety net, to ensure no physical walls and barbed wire would be erected along the Irish border if the UK and EU do not reach a trade contract by 2021.

Neither Ireland nor North Ireland want a hard border.

May needs the UK Parliament to ratify this agreement. But in January, the House of Commons voted against it, in large part because many members of her Conservative Party want to leave the EU without a backstop. They fear that if there is no hard border between Ireland and Northern Ireland, a demarcation might be set between Northern Ireland and Britain, undermining the integrity of the UK.

But Brussels, where the EU is headquartered, insists on the backstop, at least until the two divorce partners have agreed on how they want to trade with each other in the future.

An understanding of European history is critical to understand the backstop.

Here, an understanding of European history is critical.

The Irish were once the first victims of British colonialism. For centuries, London tried to subjugate the Green Island through military campaigns, eventually failing. When the Republic of Ireland won independence in 1922, English settlers in the northern part of the island split off from the new republic, creating Northern Ireland.

This separation led to bloody conflict between North and South that raged until the 1990s. It was pacified only after both Ireland and UK sat together in the European Union. The idea of a unified continent eased tensions between Irish Catholics and Northern Irish Protestants, and ultimately paved the way to peace, which was formalized in the 1998 Good Friday Agreement.

EU leaders have ruled out re-negotiations on border management and insisted that the backstop is not negotiable. European Council President Donald Tusk put it clearly, saying the Withdrawal Agreement “is the only way to ensure an orderly withdrawal of the United Kingdom from the European Union.”

No side wants a “no-deal” Brexit.

European Commission President Jean-Claude Juncker has said the EU is unwilling to “throw Ireland under the bus.” The problem is this: May has a mandate from Parliament to renegotiate the agreement, with time running out until March 29, but Parliament has not offered any alternatives to what she proposed.

If no agreement is reached by March 29, the UK will leave the EU without an agreement, in what is known as a “no-deal Brexit.” This is a scenario few people want.

Germany’s Chancellor Angela Merkel offered a glimmer of hope when she said she is ready to find a “creative solution” so that there are no border controls at the Irish border.

But Merkel names one crucial condition: “We need to know from Britain what they really want.” On that, the United Kingdom is not yet united.

Christine Keilholz is a political journalist based in Dresden, Germany. She writes about German policy for Frankfurter Allgemeine Zeitung, Welt, Cicero and others. She has studied History and German at the University of Leipzig. Currently she is in Toronto as a Fellow at the Munk School of Global Affairs.