Attacking the roots of civilization 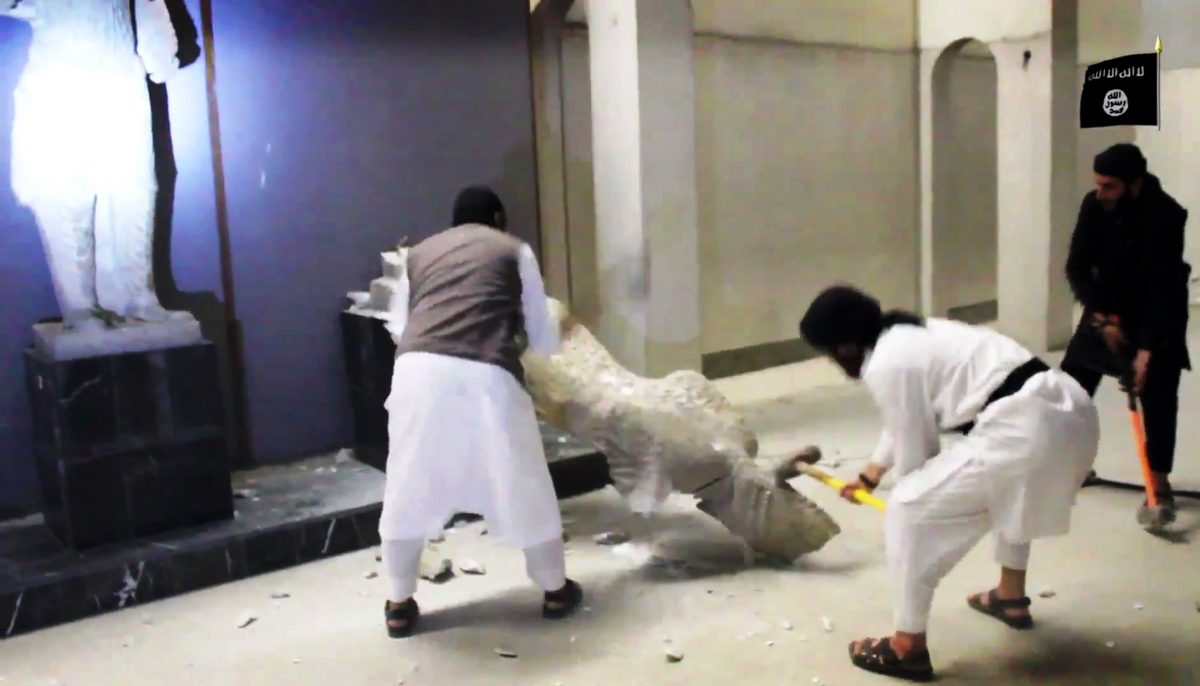 In this image made from a video posted on a social media account affiliated with the Islamic State group on Feb. 26, 2015, militants take sledgehammers to an ancient artifact in the Ninevah Museum in Mosul, Iraq. (AP Photo via militant social media account)

The destruction of ancient artifacts by militants of the Islamic State in areas under their control in northern Iraq goes beyond the ancient tradition of sectarian iconoclasm.

In the religious turmoil of the Byzantine Empire, zealots destroyed images of Christ and saints. In Cromwell’s England, Puritan mobs took pickaxes to the statues and fabric of churches.

With its rampage through the museum at Mosul and its bulldozing of the remains of the city of Nimrod, Islamic State is not attacking ideological rivals but rather the roots of human civilization.

The neo-Assyrians who made ancient Nimrod their capital in 1300 BC were relative latecomers to a region that had seen the birth of agriculture, cities, writing, the law and monotheism. Many artifacts are now to be found in museums in the West, shipped out by explorers who began uncovering the region’s rich history from the 19th century onwards.

Scholars have painstakingly pieced together and translated cuneiform tablets to reveal the origins of the myth of Noah’s flood as well as the more mundane record of the development of language, government and trade.

Much more awaits study on and under the ground in a region archaeologists have been prevented from reaching by decades of dictatorship and war. As a result of the Islamic State’s actions, some of that legacy may now be gone forever.

Like the Afghan Taliban who dynamited two giant statues of the Buddha at Bamyan in 2001, Islamic State militants are expending religious fervor on supposed “idols” that long predate Islam. The destruction represents a level of nihilism that some fundamentalists have rejected in the past.

Shortly after the Iranian revolution in 1979, radicals loyal to Ayatollah Ruhollah Khomeini — called the “idol smasher” — set off to destroy the remains of the ancient Persian city of Persepolis, where the former Shah had staged a kitschy celebration of his monarchy a few years earlier.

The clergy stepped in to halt the threatened destruction, telling their followers that they must respect their historical heritage as well as their religion.

Harvey Morris has been a foreign correspondent for Reuters, The Independent and the Financial Times. He has covered revolutions, wars, politics and diplomacy in the Middle East, Europe, Africa and North and South America in more than 40 years as a journalist, including on-the-ground reporting of the Iranian, Portuguese, Nicaraguan and Romanian revolutions, three Iraq wars, Argentina’s ‘dirty war’, the 1982 Israeli invasion of Lebanon and two Palestinian intifadas. He has written three books on the Middle East, including the best-selling Saddam’s War.

Originally published at www.linkedin.com on March 7, 2015.