In America, a teenage revolt against lax gun laws

In America, reactions to school shootings follow a numbing pattern: grief, outrage and unfulfilled calls for gun laws. This time, things are different. 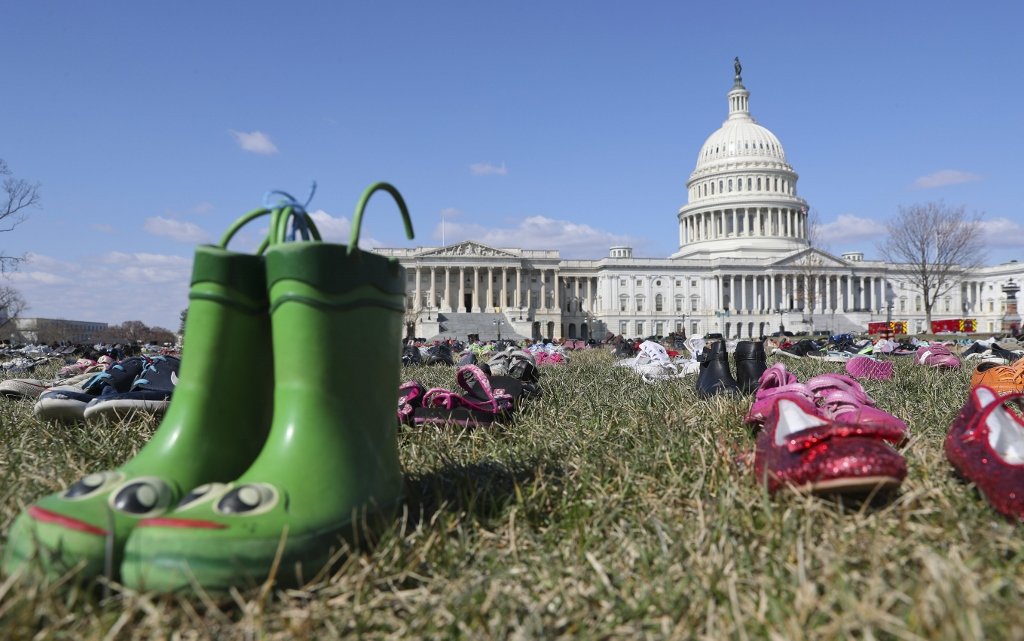 7,000 pairs of shoes, one for every child killed by gun violence since the 2012 Sandy Hook school shooting, on the lawn of the U.S. Capitol building, Washington, 13 March 2018. (AP Photo/Pablo Martinez Monsivais)

Those two hashtags bracketed something without precedent in the United States, where school massacres have become so common that only the bloodiest make news — such as the murder last month of 17 high school students in Florida by a former student armed with a military-style semi-automatic rifle.

Reactions to school shootings on that scale tend to follow a numbingly similar pattern: grief and outrage from parents and community leaders, calls for gun reform, exhortations from Republican leaders not to “politicize a tragedy,” assurances from politicians on both sides that they are sending “thoughts and prayers.”

On the ground, outside the murder scene: makeshift memorials, with flowers, teddy bears, pictures of the dead and heartfelt notes of sympathy.

For years, regular as clockwork, gun sales have spiked after mass shootings, as have shares of the two biggest publicy-traded gun manufacturers, Ruger and Smith & Wessson.

But this time is different.

Chants of “We want change.”

This time, mass murder sparked a mass movement by high school students fed up with a system that has turned the United States into the world leader in gun rampages and the country where there are more guns in private hands than anywhere else.

On March 14, a month after the shooting at Marjory Stoneman Douglas High School in Parkland, Florida, almost a million students walked out of some 3,000 high schools across the country to commemorate the victims and call for laws that would make it tougher to buy weapons designed for war such as the AR-15 used in Florida.

The first mass demonstration for gun reform by teenagers was programmed to last just 17 minutes — one minute for each victim — but thousands took time to argue their case in front of state capitals. In Washington, a large crowd turned their backs to the White House and after 17 minutes of silence broke into chants, “We want change.”

Up Pennsylvania Avenue, a gun reform group had arranged a chilling tableau to illustrate how America’s gun violence affects children — 7,000 pairs of shoes laid out on the lawn outside the Capitol. They represented the number of child victims since the 2012 shooting of 20 children and six adults at the Sandy Hook school in Connecticut.

Neither Sandy Hook nor any other mass killing has led to legislation that would tighten access to guns or eliminate peculiarities that beggar belief. Examples: an American on a terrorist watch list is banned from flying but not from buying guns; the state of Iowa is issuing permits to blind people allowing them to carry guns in public.

Multiple attempts to inject a modicum of common sense into American gun regulations — they vary from state to state — have failed regularly over resistance from gun lobbies, chief of all the National Rifle Association (NRA), which wields vast influence over lawmakers and portrays even the smallest changes as attacks on the right to keep and bear arms enshrined in the Second Amendment to the U.S. Constitution.

After each gun rampage, outrage and debate spike and then begin to fade – a trend of  which the participants in the school walkout were keenly aware. “Don’t ignore us,” read one poster in front of the White House. “We won’t forget – and we will vote.”

To make sure the Florida shooting stays fresh in the minds of policymakers, the newly-minted teenage activists expect to attract at least half a million people to a March on Washington on March 24.

Adept at using social media like no generation before them, the teenagers’ demands for change will feature on Twitter, Snapchat and Facebook, with hashtags complementing action on the ground.

The track record of attempts to make the country’s gun laws less permissive or to ban the sale of rapid-fire rifles leaves little room for optimism. The death toll from guns — murder and suicide — has held steady at around 32,000 a year for decades.

But what is different this time is not only the age and passion of the #EnoughIsEnough crowd and their skill in using social media as a tool of influence.

What is different also is the reaction from corporations selling weapons. Two of the biggest, Walmart and Dick’s Sporting Goods, have raised the minimum age for buying a firearm and ammunition to 21 from 18.

And one of the staunchest champions of the NRA and easy access, Florida Governor Rick Scott, recently signed into law a bipartisan bill that raised the minimum age to 21 and imposed a three-day waiting period for most purchases of military-style semi-automatic rifles.

The bill fell short of the demands of gun control activists — it did not ban the sale of such rifles — but it was a major break with the NRA in one of the most gun-friendly states in America.

A new crop of teenage activists

In the past, defenders of unfettered access have often argued and acted with a passion not quite matched by gun control advocates. That may be changing with the new crop of teenage activists who know how to rally their peers.

Take Emma Gonzalez, a senior at Marjorie Stoneman Douglas whose impassioned speech after the massacre went viral on YouTube. Within days, her twitter account attracted more than a million followers. (The NRA has 606,000).

Here’s one of the quotes that pushed her peers’ emotional buttons:

(For more News-Decoder stories on guns in America, click here.)