A Syrian’s view: her nation’s future at risk

Lamis Aljasem has worked with young Syrian refugee children. “The next generation of Syrians is either going to be poorly educated or brainwashed.”

Lamis Aljasem grew up in Raqqa, Syria. She moved to France in 2013, two years after a civil war between the governing Syrian regime and opposition forces erupted. Currently a masters student in Global Communications at the American University of Paris, she worked with children refugees from Syria in Lebanon last summer.

Q: You worked with Syrian refugee children in Lebanon. What kind of work was it?

Aljasem: I won a scholarship through the American University of Paris, which asked me to do an internship at an non-governmental organization. I worked with Najda Now International, a non-profit with the Syrian Humanitarian Relief and Development Institute, in Lebanon for a month, in August 2015.

The service I worked for aims to educate Syrian children who are refugees in Lebanon. It has an education center for children in Beirut, an “alternative school” called Tomorrow Is Ours that welcomes children aged 6 to 11.

At the center, children are taught Arabic, English and mathematics, and they attend arts workshops.

But many don’t go to school — they need to work in the streets to help their families.

Q: What were your responsibilities?

Aljasem: My first project was to plan a “happy day,” a one-day trip out of Beirut for children who work in the streets.

They clean shoes or sell flowers or gum every day. Some have been working there for three years, since the war started. They never get a chance to play, and they haven’t been to school in years.

This “happy day” was organized both for the street children and for the ones who go to the Tomorrow Now center.

We mixed them — they played summer camp games like football and created collective drawings — so they would talk and so the street children would think of returning to their studies.

“Their wishes were so small.”

We went to a nice place near the river and Saida City, about 40 kilometers (25 miles) south of Beirut. We had 27 children, among them seven from the streets. We couldn’t convince more to come because their families wouldn’t allow them — they couldn’t afford to let their children miss work for a single day.

I interviewed 45 children and created a few short profiles, in the style of Humans of New York, for Najda Now’s social media.

We wanted to give them a chance to talk, to shine a light on how they live.

In the streets, most of the children said they missed school and were tired of working every day, but it was their family’s only option.

Talking to them, I discovered how Syrian children have changed. Some are five or seven years old and don’t remember Syria at all.

Q: What struck you the most, meeting refugee children?

Aljasem: I would always ask them what they wanted to do in the future. In the world, all children have dreams of becoming pop singers or doctors. But these ones were shockingly realistic.

Their wishes were so small. They dream about the food they used to like, that kind of thing.

Muhammad, an eight-year-old, told me that he didn’t want to grow up, just turn nine so he could start working to help his father. He summed it all up.

They all drew their old house. Houses, with a garden and sun. They talked about how they missed Syria and the family they sometimes still have there.

I, too, have friends and relatives in Syria. We are in the same situation. They know they can’t go back.

“The next generation of Syrians is either going to be poorly educated or brainwashed.”

Those who remember Syria remembered a country in war, not the one I grew up in. They said they liked Lebanon better.

To me, it was sad and a shock.

Aljasem: These children are the next generation of Syrians. They are the generation who might someday get a chance to go back and rebuild the country.

Education is my main concern because right now there are four million Syrian children who are refugees in Turkey, Lebanon, Jordan. Most haven’t been to school regularly in three years, some not at all.

And now ISIS, which controls many Syrian regions, is launching its own education program to teach the children who still live there.

So the next generation of Syrians is going to be either poorly educated or brainwashed.

Syria is a dangerous place to live now, you can only live there in fear. People leave because they are helpless and could be killed. But these children, in Turkey and Lebanon, still need education.

I have had the chance to pursue my studies in France, and that’s the best I can do now — educate myself and try to educate others. 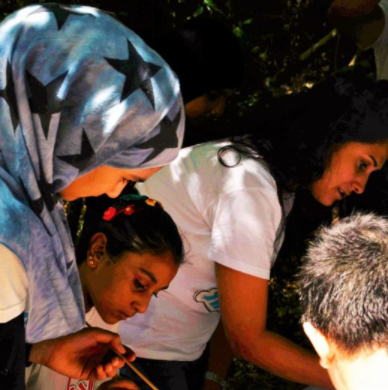