A Harrowing Moment in a Lifetime of Sports Cover 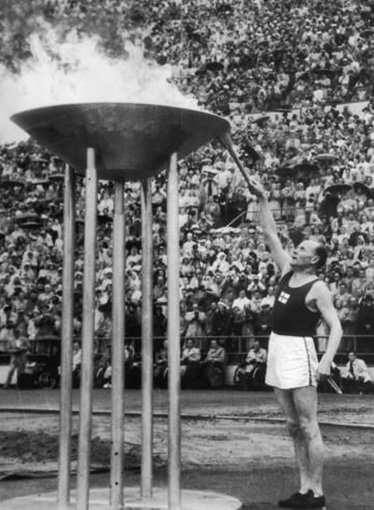 Guessing the identify of the athlete selected to light the stadium flame at the Olympic opening ceremony is an absorbing but mostly futile exercise serving mainly as a pleasant diversion in the buildup to the Games for those privileged to cover the world’s most spectacular sorting extravaganza.

Still it was an opening ceremony and the choice of the final athlete to take the torch carried by relay from Ancient Olympia that produced one of the most memorable moments in my career as a sportswriter.

The difficulty in second-guessing the local organizing committee’s decisions since the torch lighting was introduced at the 1936 Berlin Games lies in the supremely elastic criteria used to decide the final bearer.

A precedent could have been set at the 1952 Helsinki Games when Paavo Nurmi, greatest of the flying Finns who dominated distance running in the 1920s, lit the cauldron. Still a trim figure, Nurmi was instantly recognizable to Finns and foreigners alike. To this day a statue stands outside the Helsinki Olympic stadium.

It was different 12 years later when Yoshinori Sakai was chosen to light the flame in Tokyo. Very few knew who he was, but Sakai had been born on August 6, 1945, the day his city had been destroyed by an atomic bomb.

Sydney organizers opted against choosing one of their many renowned former Olympians in 2000. Instead they heaped further pressure on aboriginal Cathy Freeman, who at that stage had still to win an Olympic title.

Two years ago in London, after a quirky if immensely entertaining opening ceremony, many felt let down when no big name was chosen but instead seven aspiring athletes shared the honor.

There was no such disappointment at the 1996 Atlanta opening ceremony.

It was, we agreed, one of the great Olympic moments.

The 1996 Games are not remembered fondly by journalists. Organizational chaos was such that even the results service, the bedrock for international news organizations, was bedevilled by errors.

But results, traffic jams and security worries were the last things on anyone’s mind when the man chosen to light the cauldron was revealed. The handover from four times Olympic swimming champion Janet Nelson to a man dressed in white we quickly recognized as Muhammad Ali prompted conflicting emotions.

It seemed profoundly right that the dazzling light-heavyweight champion from the 1960 Rome Olympics who had become a leading figure in the civil rights movement should be lighting the cauldron in the city symbolizing the old U.S. South. Gifted boxer and political activist, Ali in his time was the best known person in the world.

As Ali himself once put it, “I am the greatest.”

But he had paid a terrible price for his brutal trade. Ravaged by Parkinson’s syndrome, his still handsome face frozen in a mask by his illness, Ali struggled to light the cauldron. His left arm, once the source of the fastest jab in boxing, shook uncontrollably.

“By sheer force of will, Ali lifted the torch with both hands, narrowly missed scorching his right arm, and lit the flame,” I later wrote of the moment of fascinated horror that yielded to sheer relief.

On the day after the London Games’ opening ceremony, I recalled that hot Atlanta night with one of Britain’s top sportswriters as we waited for security checks. It was, we agreed, one of the great Olympic moments.

But how easily it could have been one of the worst.

John Mehaffey has 40 years of experience as a journalist, including 33 on the Reuters Sports Desk. He covered seven summer Olympics as well as numerous World Cups and world championships in athletics, cricket, rugby, boxing and gymnastics. He wrote extensively on drugs in sport, the readmission of South Africa to international sport and corruption in cricket.