88—A Good Number for a Virtuoso Pianist

One of the world’s greatest concert pianists, Byron Janis, celebrates his 88th birthday today. His son recalls growing up with his father.

One of the world’s greatest concert pianists, Byron Janis, celebrates his 88th birthday today. News-Decoder is honored to have among its loyal readers Stefan Janis, the pianist’s son.

Below Stefan reflects on growing up with his father, who among many accomplishments discovered two previously unknown versions of waltzes composed by Frédéric Chopin.

The Oscar-winning director Martin Scorsese is developing a biopic of Byron Janis, who was selected by the United States as the first American to be sent to the Soviet Union in 1960.

I can remember being backstage in the 1970s after one of my father’s concerts at Avery Fisher Hall in New York City.

I was standing next to pianist Gary Graffman, who had just finished praising my father’s performance of Chopin and Liszt, when a stranger came up to me and asked, “What’s it like to be the son of Byron Janis?”

I hesitated to answer. Then, as I so often did when this question came up, I replied: “It’s wonderful, a real honor!”

What it really was over the years was “wonderfully difficult.” The wonderful part was being close to a man with such tremendous artistry and an uncanny ability to keep his humble beginnings in mind. The difficult part was trying to live up to the expectations I thought he had of me and accepting the challenge of living in the shadow of his tremendous career most of the time. 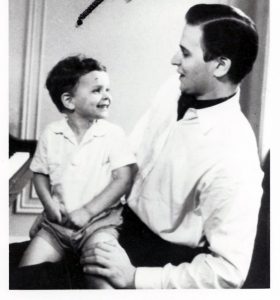 Although Dad, who celebrates his 88th birthday today, did not want me to be a pianist, he taught me to love music early in life, from the point of view of hearing as well as seeing.

We would sit together, and he would play a mazurka by Chopin and then explain to me that the secret to almost all good interpretation was imitating the human voice as closely as possible. He also educated my ear by stressing the importance of rubato, a term that translates as give and take, which permits the interpreter to speed up or slacken the tempo without altering the overall pace.

Seeing him perform was also a tremendous part of my early joy in music. I’m not sure if it was part of his technique or not, but when the dynamics called for it, he would rise up and down rhythmically on the piano bench, creating a tremendous sense of energy and drama.

The same was true when his hands would describe flourishes through the air, marking either a downbeat or the end of a phrase. Liszt’s Piano Concerto in E-flat Major and Prokofiev’s Concerto No. 3 in C Major became fast favorites for this reason, and there are performances of these at Chicago’s Ravinia Park I will never forget.

Another aspect of his teaching was when we worked together writing several songs — he the music and myself the lyrics. One song in particular, “David’s Star”, has been quite successful. This song for peace throughout Israel was composed for the 40th anniversary of the creation of the State of Israel. It was first performed on Broadway at the Shubert Theatre in 1988, with vocals by the late Laurie Beechman (at the time she had the lead in “Cats” on Broadway) and my Dad at the piano. I sat in the audience with a huge grin.

The other profound lesson Dad taught me has kept me in good stead all of my life and it defines manhood. The lesson consisted of reading to me the poem “If” by Rudyard Kipling. Three lines of it were particularly pertinent as I occasionally trotted the globe on tour with my father, or spent six grueling months writing nondescript items for a newspaper before being appointed a music reviewer for 17 years:

“If you can talk with crowds and keep your virtue,
Or walk with Kings—nor lose the common touch,
… you’ll be a Man, my son!”

These words by Kipling, you’ll see, are particularly a propos when I relate the extraordinary story of how Dad discovered two Chopin waltzes, both in two different editions from the published version. The first two he found at Chateau de Thoiry, a 16th century castle about 30 miles from Paris, and the latter two at Yale University in the United States. Both discoveries made the front page of The New York Times.

He discovered the manuscripts in a box with a blue ribbon.

Just as Chopin loved teaching piano in Paris to members of the aristocracy, my father had a tremendous kinship and love of the aristocracy. I remember 1969, the year he discovered different editions of the Grande Valse Brilliante Opus 18 and the Waltz Opus 30 at Thoiry.

I flew from London, England, to Deauville, France, where Dad was performing a recital at the Casino. Our afternoons were spent at the Deauville race course, betting on thoroughbreds and watching members of the Rothschild family play polo.

From there, we drove to Paris and on to Thoiry, where my father was going to announce on French television that he had discovered the manuscripts in a box with a blue ribbon marked “old clothes” — truly one of the great experiences of my life!

The castle of Thoiry was the property of the Count de la Panouse, head of an extremely old and distinguished French family. Rounding out the notables were his wife, the Countess; his son, the Viscount; Mrs. Joseph (Rose) Kennedy; Giscard D’Estaing, French finance minister and later president; U.S. Ambassador Sargent Shriver and his wife, Eunice; the Comte de Paris, the nominal heir to the French throne; and my stepmother, Maria.

There were two other stars of the event: two tame cheetahs. They were so tame one could place one’s hand inside their muzzles. All I did was pet them, though.

Before the sit-down luncheon for about 150 people, my father performed on live TV the two waltzes in their two different unpublished versions. Then came the six-course luncheon. Although as a young teenager I might have been tempted to complain about being at a table so far from my parents, I quickly refrained. Seated around me were princes and princesses from Austria, Holland, England and France — some eight noblemen and noblewomen in all.

Clearly, I was “entitled” to have the best time of my life!

Stefan Janis is author of the book, “The Church of the Redeemer UCC: 1950-2015”. He is currently working on a translation of Raymond Abellio’s “les Yeux d’Ezechiel sont ouverts” from French into English and is also working on several short stories. He is a former art reviewer for The Star-Ledger of New Jersey and The Litchfield County Times. He lives in New Haven, Connecticut, in the United States.