I returned from the Vietnam War in 1968 and helped lead the anti-war movement that exploded in Chicago. Looking back, I wonder what we learned. 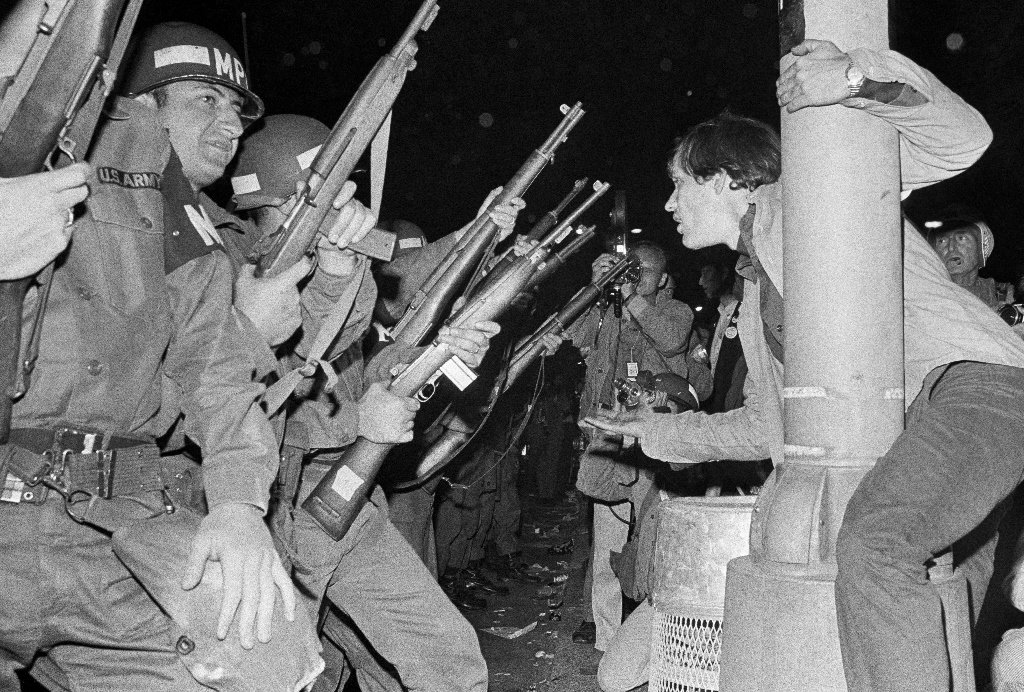 And by gosh, I was at all of them, either in person or via TV.

The questions I ask myself now are:

Did the demonstrations matter?
Did change occur?
Does any of this apply today?

I returned from 365 days in Viet Nam on Easter Sunday, 1968, having opposed the war from its start. But for mixed reasons I decided not to move to Canada — where my grandparents lived and I summered — or to Switzerland or Sweden. Instead, my wife, 3-year-old daughter and I worked, wrote and marched against the war.

Face-to-face with batons, teargas and anger

We started the reading of the names of the war dead 24 hours a day at Riverside Church in New York (for which I got fired from my job, long story, but in short, I pushed my boss one step too far) and took out a full-page ad in the New York Times promoting our anti-war position.

But we tried to resume our normal lives and went on vacation to Paris, where we came face-to-face with the batons (wielded by riot police), the smell (teargas) and the anger.

We joined the Vietnam Veterans Against the War and worked in a tacky office with communists, resisters, deserters and pacifist Friends.

Then came the 1968 Democratic National Convention in Chicago. We were “Clean for Gene” — youthful supporters of Eugene McCarthy but with no jeans or facial hair, only suits and ties and our Viet Nam medals (I had a Bronze Star and several others, just for “showing up.”)

We vets worked the delegations in their hotel suites, respectfully but forcefully. I was on TV a lot and learned how to deliver a 20-second response or give an hour-long interview. I suppose it got to my head. We thought we could change the world. We were in the right, we had reason on our side.

The day the convention went into high gear, my wife and I were walking from my parents’ apartment to an appointment at the Hilton Hotel. Suddenly we were shoved to the ground by batons of Mayor Richard Daley’s police, and the Hilton smelled of tear gas and vomit. This was not what we had expected.

The convention turned out to be chaotic. The war took 10 years to wind down.

“We must cultivate our garden.”

So what was the outcome?

The war stopped 10 years later.
The best medical school in France was split into 20 parts.
A new newspaper Liberation was born.
The number of Viet Nam Vets with post-traumatic stress disorder was “discovered.”
The seriously mentally ill flooded the streets, jails and homeless shelters.

Fast forward to today. The United States is stuck in the longest war we’ve ever had. We have a broken health/mental health system, a president with a loose connection with the truth, a population divided between angry folks on both sides and marches every few months.

Do marches do much of anything anymore?

I don’t know. They did in 1968, but this is 50 years later, and the atmosphere is not the same. Except for the Women’s March and the anti-gun movement, which have mobilized a lot of people to register new voters, work in red states and get a large new cohort of woman candidates to run for office.

Remember Voltaire’s Candide, who suggests “we must cultivate our garden.” Maybe that’s the way to go.

John Talbott is a professor of Psychiatry at the University of Maryland who calls himself a lifelong “trouble maker.” He has been writing and editing since grade school (and wrote for the Harvard Lampoon), has over 200 publications and has been editor-in-chief of three major medical journals. Following his residency, he was drafted into the Army and spent a year in Vietnam, receiving a Bronze Star “through no fault of my own.” Since 2000 he has reviewed Paris restaurants, most recently for his blog, John Talbott’s Paris.