Fed up with corruption and shortages of food and fuel, protesters are calling on Sri Lanka’s rulers to resign as the South Asian nation nears bankruptcy. 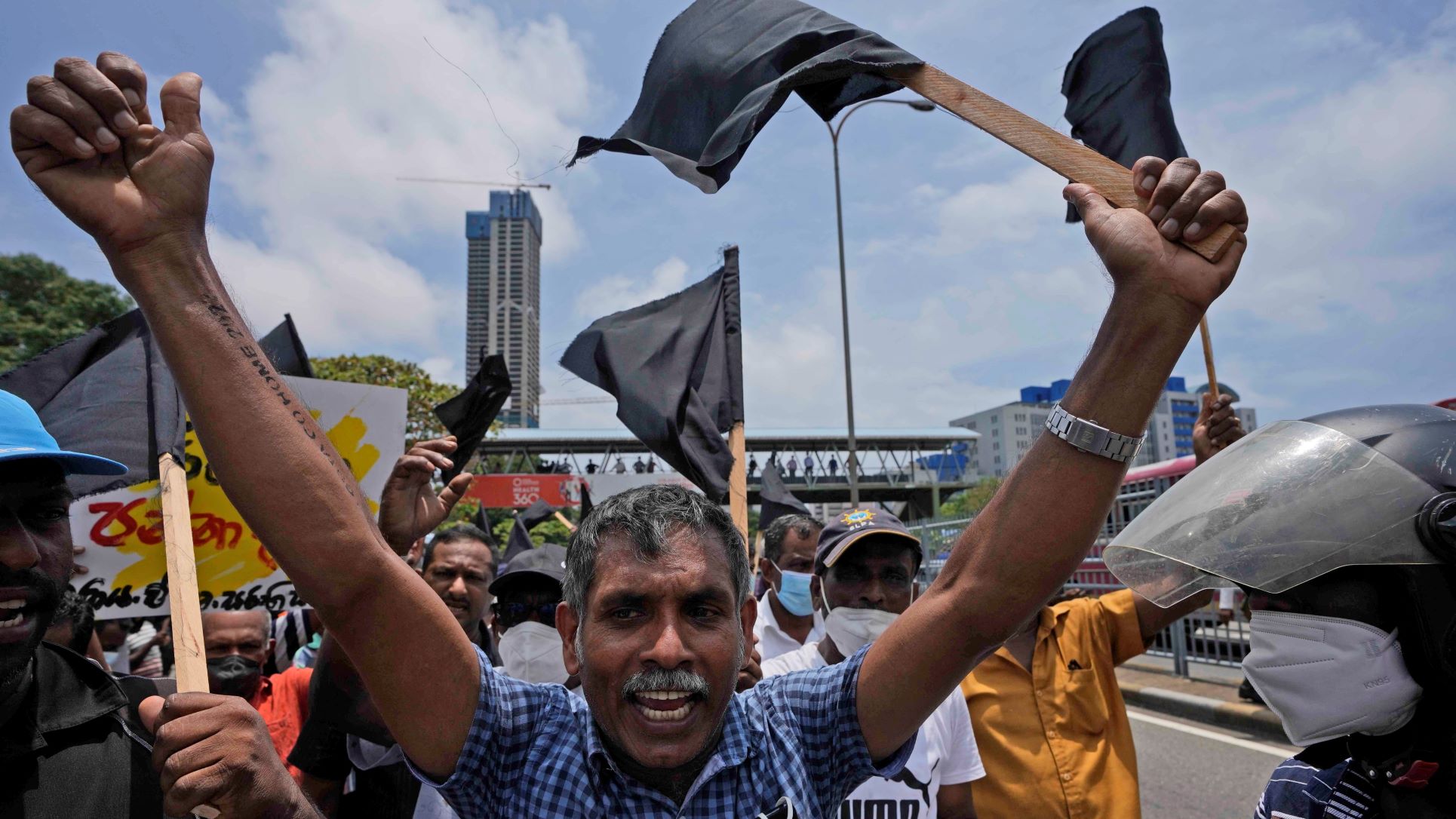 Dogged by corruption, economic mismanagement, near bankruptcy and food and fuel shortages, Sri Lanka’s powerful but embattled first family is clinging to power amidst mounting protests across the strategically located island nation.

Thousands of protests have sprung up over the past few months. They started with demontrations by farmers infuriated by a ban on chemical fertiliser.

The movement then spread to a cross section of Sri Lankan society after the government ran out of foreign cash to pay for fuel and food imports. A shortage of fuel, cooking gas and medicines has spawned queues all over the island of 22 million people that lies south of India.

Annual inflation has surged to more than 30%, while Sri Lanka’s currency, the rupee, has been fallen by more than 50% against the U.S. dollar, the main trading currency, since early March.

Much of the protesters’ ire is directed at the family of President Gotabaya Rajapaksa, who has governed the island nation since 2019 with other relatives in senior government positions. His elder brother Mahinda is prime minister.

“The Rajapaksa clan is increasingly getting marginalized and isolated while their political base is rapidly shrinking,” said Jehan Perera, a human rights activist and popular newspaper columnist.

Located in the Indian Ocean, Sri Lanka sits on important international transport routes. Historically, its huge neighbor to the north, India, has had influence over the island’s affairs, but more recently, China has lent Colombo huge sums as part of its Belt and Road Initiative.

Foreign currency reserves have fallen to below $1 billion from $7 billion in 2018. Earlier this month, the government suspended repayment of all foreign debt until a restructuring mechanism is in place.

The International Monetary Fund said last week that it had held fruitful discussions with Sri Lanka on a loan request, while the World Bank said it was preparing an emergency aid package for the crisis-stricken country.

Since April 3, thousands of protestors have camped outside the president’s office near a popular seaside promenade in the heart of the capital Colombo in a peaceful protest demanding that the first family step down from power.

Tired of the Rajapaksa family dominating positions of power, the protestors rejected the appointment of a new cabinet on April 18 that included the president’s brother as prime minister.

The Rajapaksa family has been accused of diverting public money for personal gain and of mismanaging the economy. Recently, Mahinda Rajapaksa and his family reportedly hired a private jet costing millions of dollar to attend a religious festival in India.

The family, which enjoys the backing of the military, denies wrongdoing.

Mahinda Rajapaksa is a former president who served two terms of office from 2005 to 2015. The current president served as defence secretary during a stretch of a 30-year ethnic conflict that ended in 2009.

A civic rebellion, inspired by youth

Overseas, Sri Lanka is known for its expansive tea plantations, spread across carpeted hills in the central highlands, its rich cultural history and its beautiful beaches.

Mired in debt, the island nation now is among those near bankrupt countries crippled by economic mismanagement, shortages and corruption. Shantayanan Devarajan, a former World Bank senior economist, said that without a debt restructuring, Sri Lanka will have to default on its obligations.

“It will be unable to meet its debt service obligations, at which point the country loses access to foreign exchange. This is what happened in Lebanon in 2020,” Devarajan said in a recent newspaper interview.

Protests in Colombo have featured young people from all walks of life, with well-wishers providing food, drink and other essentials amid impromptu live concerts.

The main site of the protests is nicknamed “Gotagogama” (Go Home Gota), a biting play on the president’s nickname, Gota.

“Sri Lanka is witnessing the biggest social movement ever in my lifetime,” said Dayan Jayatilleka, a political scientist and former diplomat. “It is a civic rebellion of all classes of all generations, driven and inspired by the youth.”

A new kind of patriotism

Jayatilleka said young protesters generally opposed the sale of national assets to India, China or the United States. “But the protest is not taking a xenophobic character,” he said. “It is a new kind of patriotism by the young generation.”

“The protest connects people’s movements in other countries like what we saw in Hong Kong, the Arab Spring and the U.S. Black Lives Matter movement, showing the power of young people and also social media as a platform and taglines to attract attention,” said Bhavani Fonseka, a senior researcher at the Centre for Policy Alternatives.

In scenes unthinkable only a few months ago, bullock carts driven by men selling kerosene and paraffin lamps have appeared on the capital’s streets. Fuel is being rationed, forcing some residents to dust off old bicycles. Power has been down for as much as 13 hours a day, crippling many businesses.

When cooking gas supplies started running low, human rights activist Visaka Dharmadasa switched to a stove that uses firewood from her garden in the country’s central hill town of Kandy.

“I am one of the lucky ones as there aren’t many, particularly in the capital Colombo and its environs, who can make such a switch as they either live in houses with tiny gardens or in apartments,” she said.