Will drones ever replace journalists?

Drones are a dream come true for cameramen. But they raise thorny ethical questions and are causing headaches for regulators. 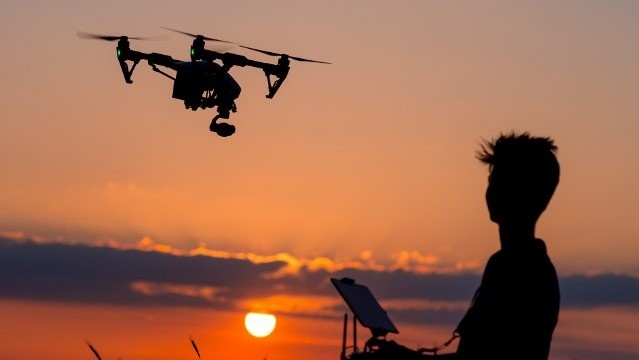 Drones are a cameraman’s dream. They can shoot photos or video in places where it is too difficult or too dangerous for a human to go. They cost hundreds of times less than a helicopter.

But their use poses problems, particularly the potential invasion of privacy.

I never realized the power of the drone until my attention was jolted by a mild-mannered journalism professor who demonstrated one last month at a global media forum in Bonn, Germany.

Matthew Waite of the University of Nebraska-Lincoln in the United States set up his three-pound “toy” airplane in the former parliamentary chamber of the German Parliament. Using a remote control, he guided it up and down as a group of journalists and human rights activists looked on with amusement.

The whirring of its blades was immediately obvious and highlighted potential problems.

Professor Waite runs one of the few courses in the world on drone journalism. He is cautious about the use of UAVs (unmanned aerial vehicles) to cover events. “The rapidly spinning blades can be dangerous if it falls on a crowd and injures someone,” cautioned the journalism professor.

“I tell my students: this is a terrible idea and we should not do this. That’s always a possibility (of someone getting injured).”

Drones are an inevitable tool in today’s highly developed world.

Drones are widely used in film production and news media, but countries are still figuring out how to regulate them. The reality is that in today’s technologically advanced world, drones are an inevitable tool. Privacy is a luxury commodity, with Facebook, Twitter, social media and chip technology prying into just about every movement you make.

Drones help cover natural disasters and man-made ones like soccer fights more effectively with the UAV hovering in the air 300-400 feet above the ground “shooting” at will – unless shot down by an angry bystander. In the process, it protects photographers often in the line of fire, whether covering riots or gun battles.

But when it comes to privacy and ethics, the drone-journalism guru has a point.

Is it fair to use a drone to take pictures of a mother or a father wailing over the bodies of two or three children shot dead in a bloody attack?

Is it fair to invade those tragic moments with a noisy drone taking pictures at will instead of a more circumspect photographer who emphasizes the tragedy by shooting discreetly?

“I am really worried about covering real stories like murders and tragedy and how the psychology of noise plays on the victims,” Prof. Waite said, noting there are no easy answers.

“In such situations, I don’t think it is ethical for a noisy drone to intrude into such private moments.”

The use of a robot to blow up a gunman in Texas last week has raised thorny ethical questions about the militarization of U.S. police and the remote-controlled use of force. The use of drones by the United States to hunt down and kill adversaries in its fight against alleged extremists has also stirred ethical concerns.

Clearly, technology is rapidly taking us into uncharted ethical territory.

Aviation authorities across the world are at loss in drafting rules for drones.

Prof. Waite obtained a commercial airline pilot’s licence to “fly a drone that is just three pounds”. Now the hitch: “How do I get into the aircraft to prove its air-worthiness when the annual inspection comes,” he asked, triggering laughter from the audience.

Even in the United States, there were no proper rules governing drones until federal aviation authorities began working on some to be presented soon. Three U.S. news organisations have obtained drone licenses after a laborious process.

Film production units can buy drones for a fraction of the cost of helicopters. It is an easier way to get the camera right into the path of a car chase without risking life and limb.

The drone is a flying smartphone.

While in India and Australia drones are used freely though under strict rules, laws can be cumbersome in South Africa. In Britain there are no specific laws governing filming with drones.

Brazil is the most liberal of all countries. In Greece the main rule is that you cannot fly over populated areas, while in Germany usual commercial filming restrictions apply. A standout clause in most countries’ legislation is that drones cannot be flown at night.

For drone journalism to become reality, privacy laws have to be re-written, property laws drafted and a new code of journalism put in place.

At the end of the day, the drone is like a smartphone. It’s a flying smartphone, said Prof. Waite as he navigated his drone during his presentation.

It has its use, it has its place. But it will remain a tool that will help journalists, not replace them. A tool just like a camera.