Wanting to leave but nowhere to go

An American student visits the Middle East’s biggest refugee camp for Syrians in Jordan and discovers a restless and generous people. 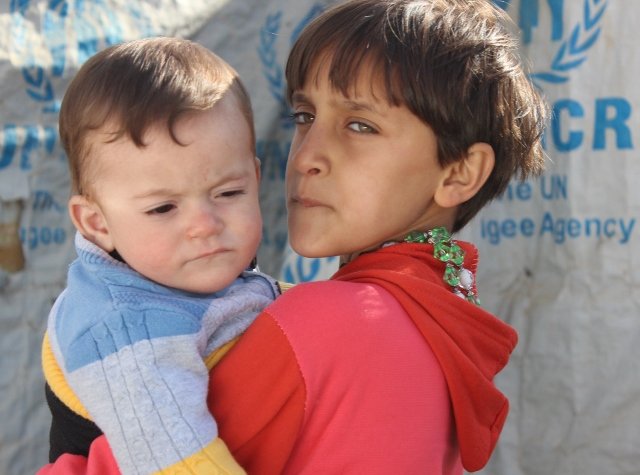 This story, written and illustrated by Samantha Schmidt, was a runner-up in the university category in News-Decoder’s inaugural reporting contest. Schmidt visited the Zaatari Refugee Camp in Jordan in December 2015.

I sat cross-legged on cushions on the floor of a one-room trailer and accepted a glass of steaming, sweetened red tea from a Syrian family I had just met.

The family of 10 lives in this small home in the Zaatari Refugee Camp in Jordan, just 20 minutes from the Syrian border.

The unfurnished home consists of two small trailers attached by a tent cover. The family has a fridge but no kitchen, and uses a small heater to cook food. The bathroom is a hole in the floor, near where dishes and a few cooking utensils are stored.

Back in Syria, the family had a large home with five rooms, the head of the family, Haithum al-Rabaee, told me.

Haithum’s cramped home was my first up-close look at the Syrian refugee crisis. A journalism student from Indiana University taking a semester in Amman, I had spent weeks working through the Jordanian government for permission to enter the camp — the largest in the Middle East — and interview residents.

The camp is now a city housing more than 80,000 refugees.

While I had struggled to get inside Zaatari, the people here were desperate to get out.

With the refugee crisis, Zaatari has grown over the past three years from a straggle of tents in the desert to a bustling city of more than 80,000 Syrians.

No one is starving, but life here isn’t easy. Most jobs in and outside the camp are illegal. Electricity is available only from 4 pm to 3 am. Tents and trailers are arranged in close, crowded rows, giving families little privacy.

I had met al-Rabaee’s wife, Haifa Mousa, earlier that day while walking through one of the camp’s two grocery stores. She had been waiting in line for more than an hour when she agreed to let me visit her home.

The couple fled Syria with their eight children more than three years ago, after a missile hit their house as they were breaking fast for Ramadan. Glass shards struck Haifa in the head while she was praying. Half the house was wrecked.

“Al-hamdu lillah,” praise be to God, “I was the only one hit,” Haifa said.

Every day, every minute, Haithum dreams of returning to Syria.

The next day the family fled for Jordan, expecting to return after a few months. But the war spun out of control, and they stayed in the camp, year after year. It’s a common story in a place where everyone wants to leave, but few have a place to go.

Haifa is especially eager to leave: her 12-year old son has kidney problems, she said, and she has to take him to a hospital outside the camp for frequent injections. She is desperately trying to relocate to Canada to seek treatment for him.

Haithum is also restless. He used to work in construction back in Syria, he said. Now, he cleans streets and bathrooms in the camp, earning about $42 each week he works. But he works only about one week every two months, due to long waiting lists for jobs.

Haithum said he would be willing to go to Canada for his son’s treatment, but he is hesitant to go so far from Syria and his family. His brothers and three of his daughters still live in Syria with their husbands.

His father died in Zaatari, Haithum said, and his body is buried here. At least here, Haithum can stay close to his father, his brothers and his country. But he misses the olive trees and the green landscape of Syria. Here, all he sees is white sand.

I asked him if he has  thought about going back to Syria, despite the war. “Every day,” Haithum said. “Every minute.”

A gesture of Arab hospitality in the worst of conditions.

As I was getting ready to leave, one of the family’s daughters, Reham, stopped me. She left the room briefly and came back with a bracelet, about an inch wide, that she had woven out of navy blue yarn.

She gave it to me and insisted I take it. On her hand she wore a matching bracelet.

I hesitated. This girl was offering me one of her few possessions, a bracelet she could sell for money to help her family. The gesture was the epitome of Arab generosity and hospitality in the midst of the worst of conditions.

I decided to accept it. Even if Reham was unable to leave the camp and come back with me to the United States, at least a small part of her could.

Back in Indiana four months later, I keep the bracelet on my dresser. I find myself picking it up from time to time, thinking of Reham, and wondering where her family is now.

Perhaps they found some way to leave the camp, to Canada or even to the United States.

But I know they’re probably still there, living their same helpless routine in Zaatari.

Samantha Schmidt is in her final year of studies in journalism and Arabic at Indiana University. She reported this piece while studying abroad in Amman, Jordan. She is an incoming James Reston Reporting Fellow at The New York Times and has previously reported for the Tampa Bay Times and Minneapolis Star Tribune.