Peace is a distant dream in war-torn Yemen

The world’s worst humanitarian disaster is unfolding in Yemen, where outside powers stoke a civil war. Peace remains a distant dream. 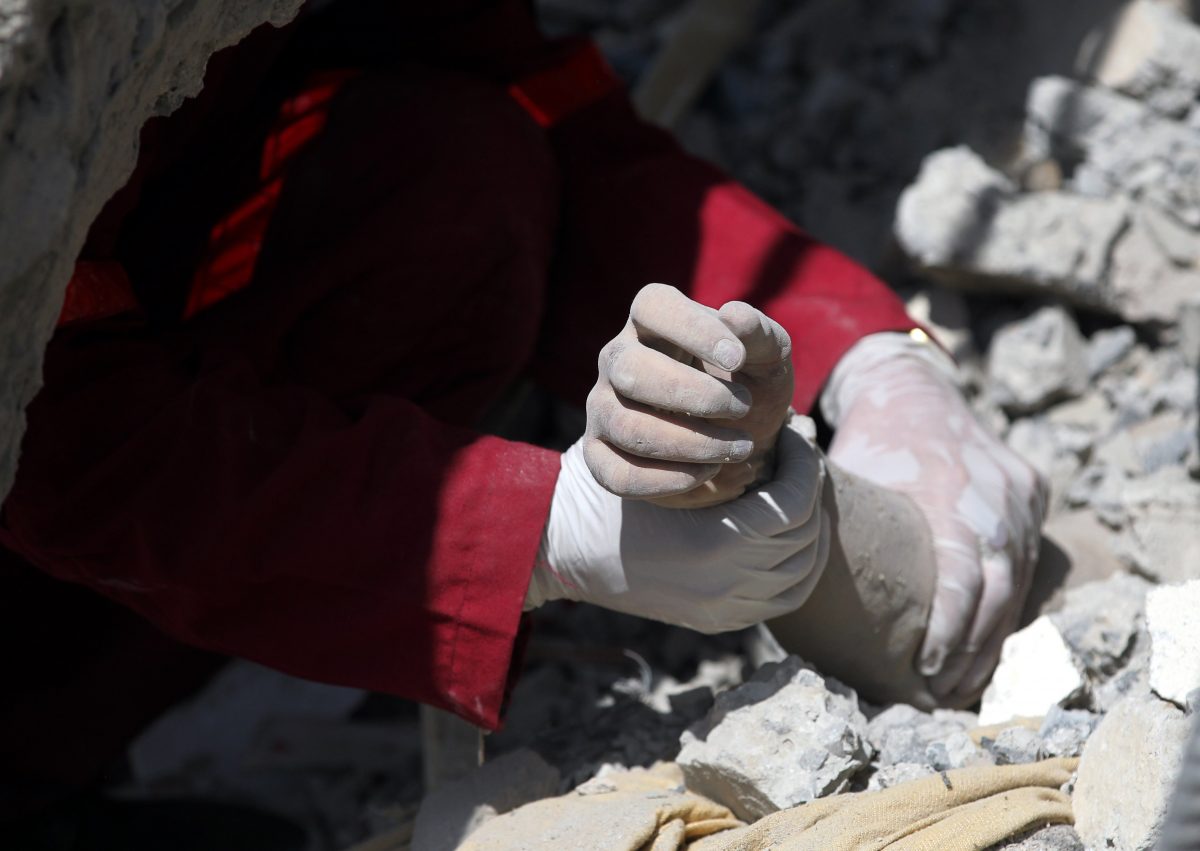 A Red Crescent staffer tries to pull a body from rubble at a detention center after it was hit by airstrikes in Dhamar, Yemen, 1 September 2019 (EPA-EFE/Yahya Arhab)

Yemen was a failed state even before civil war erupted five years ago, dragging it into a wider regional confrontation between Saudi Arabia and Iran that has triggered the world’s worst humanitarian disaster.

Now it has effectively broken up.

So far, in a misleadingly simple nutshell, the conflict has pitted Iran-backed Shi’ite Houthi rebels against an internationally recognised government supported by a Saudi-led Sunni coalition.

But last month, southern separatists armed and funded by the United Arab Emirates, a pillar of the coalition, seized control of the port city Aden from Saudi-backed government forces.

The separatists had accused the Islamist Islah party, a core government partner, of complicity in a Houthi-claimed attack on a military parade in which one of their commanders was among 36 people killed.

The latest turmoil is a propaganda gift to Iran.

The power struggle between ostensible allies in the south exposes the tensions within the motley collection of “pro-government” groups united only by their hatred of the Houthis, whose seizure of the capital Sanaa, Yemen’s biggest city, and much of the north ignited the civil war in 2014.

Many southerners resent all northerners, not just the Houthis, for their treatment of the region since a revolt aimed at restoring the south’s previous independence was crushed in 1994.

The latest turmoil and the damage inflicted on the Saudi-UAE axis are a propaganda gift to Iran and the Houthis – although neither endorses southern secession.

Riyadh and Abu Dhabi deny they have fallen out, although they have never seen eye-to-eye when it comes to Islah. The Saudis have long had dealings with the party, which the Emiratis view as a front for their own hated enemy, the Muslim Brotherhood.

Saudi Arabia and the UAE have each carried out air strikes in support of their favoured factions in recent battles for Aden, taken by the separatists on August 10. So much for coalition solidarity.

The ineffectual President Hadi Abd Rabbo, driven from Sanaa by the Houthis, has now lost his temporary capital Aden to militias of the UAE-backed Southern Transitional Council (STC).

That’s no inconvenience to him personally since he resides in the Saudi capital Riyadh, although it further shreds his already tattered credibility in the eyes of many Yemenis.

The war has plunged Yemen into what the United Nations calls the world’s worst humanitarian disaster. It has killed nearly 100,000 civilians by one estimate, displaced 3.65 million and threatens millions more with famine. State institutions have collapsed.

That has not deterred the United States, Britain and France from clinching lucrative arms sales to the Saudis and Emiratis and backing their failed drive to defeat the Houthis and restore Hadi.

Riyadh, which has relied mainly on air power, sees the Houthis – with questionable accuracy –  as a cat’s paw for its regional foe Iran. The Saudis launched their Yemen campaign in March 2015, anticipating swift victory, only to find themselves mired in a war they cannot win.

At the outset, UAE forces helped local fighters drive the Houthis from Aden. An estimated 10,000 Emirati troops and advisers in southern Yemen then trained and armed up to 90,000 militiamen loyal to the separatist STC and other factions.

UAE commanders coordinated these forces, as well as mercenaries from Sudan and elsewhere, in a coastal offensive against the Houthis in 2018 that reached the key port of Hodeida before bogging down amid international pressure for a ceasefire. The UAE also sought to contain rival al Qaeda and Islamic State groups that have thrived on chaos in Yemen.

In July, the UAE announced a troop drawdown from Hodeida and elsewhere, perhaps in recognition that pursuing the war is futile – or, as its critics suggest, in the belief it can secure its own ill-defined goals via its separatist allies in the south.

Surging tensions between the United States and Iran in the Gulf may also have spurred it to bring its forces home, although Abu Dhabi denies this.

Saudi Crown Prince Mohammed bin Salman will not want his military adventure to end in humiliation. Yemen has been devastated, but the Houthis, far from being defeated, have intensified long-range cross-border missile and drone attacks on the kingdom itself.

Despite the backing of Western arms suppliers, the prince has incurred international opprobrium for the humanitarian disaster, indiscriminate bombing and possible war crimes in Yemen, as well as for the brazen murder of Saudi journalist Jamal Khashoggi in Istanbul in 2018. The Houthis are also accused of many human rights abuses and indiscriminate attacks.

The United States and its allies share blame for the mess. They gave the Saudis a free hand in Yemen, in part to assuage Riyadh’s fury over the international nuclear deal with Iran signed in 2015 – and renounced by U.S. President Donald Trump in May last year.

The immediate priority is stopping the fighting, a task that has eluded UN mediators, despite limited successes such as a fragile ceasefire in Hodeida.

A few signs hint at changes that might open up new avenues for reducing the violence.

One is a French initiative at last month’s Group of Seven summit to promote an unprecedented meeting between the U.S. and Iranian presidents. Both men have conditions, but neither has ruled it out. Until now, Trump has aligned himself firmly with Saudi Arabia and Israel in their struggle against the Islamic Republic, in which impoverished Yemen has been miscast as a front line.

Another straw in the wind is a Wall Street Journal report that the Trump administration wants to open direct talks with the Houthis and to draw the Saudis into the diplomatic peace effort to be hosted by Oman. That prompted panic in Riyadh, and the crown prince swiftly dispatched his brother to Washington to discover whether Trump’s anti-Iran resolve was wavering.

Peace remains a distant dream in Yemen, whose bewildering complexity is perhaps one reason the world has ignored it for so long. Southerners and northerners fight among themselves. Loyalties shift among myriad political, tribal, religious, military and jihadi groups. Men join militias to feed their starving families. Warlords on all sides profit from the misery of 28 million people.

Whether Yemenis can one day glue their country back together or find a way for its parts to coexist is open to question, even if outside powers step back. Ultimately no one else can do it.