The rise and fall of cinema in Kabul

The movie industry in Afghanistan has a tumultuous history. Today, Afghan cinema and film-making are at an all-time low, with little hope of a revival. 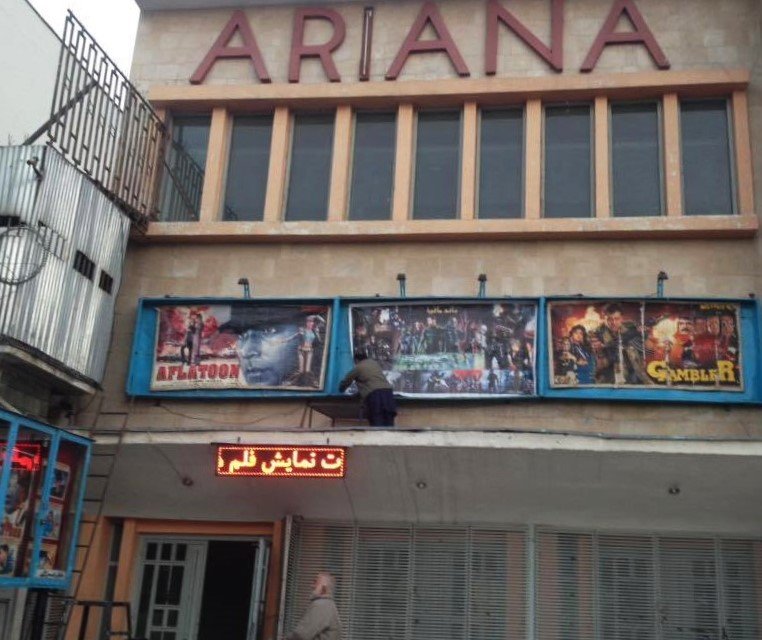 The Ariana cinema, which was badly damaged under the Taliban and later by a suicide bomber in 2010, in central Kabul (All photos by Atiq Rahimi)

KABUL, Afghanistan – For centuries, literature has provided source material for reflection on what it means to be human. While literature continues to enlighten us, cinema provides a compelling, visual alternative.

“There is simply a need that has to be fulfilled – a need to experience meaningful, life-enriching stories unfolding on the screen.” writer and director Richard Raskin once said.

But today in Afghanistan, cinema is at an all-time low. For decades, we have been deprived of the joy of watching films on screens.

It was not always this way.

Cinema was introduced in Afghanistan in the early 20th century, with the screening of silent films in the early 1920s and a first Afghan production in 1946.

Between 1961 and 1980, Afghan cinema witnessed a surge, and many films reflected the conditions of Afghan society. Among them were Mardara ra Qawl ast, directed by Saeed Orokzai (1979), Siamoih wa Jalalli by Abas Shaban (1978) and Saboore Sarbaz by Eng. Latif Ahmadi (1980).

Two Bollywood productions were shot in Afghanistan: Dharmatma, directed by Feroz Khan in 1975, and Khodagawa, directed by Nazir Ahmed and Manoj Desai in 1992.

Afghan cinema was brought to a halt under the Taliban.

In those days, Afghans flocked to movie theaters. It was an exciting form of entertainment for the youth and families of Kabul. One of the most successful films, which ran for months in Kabul, was the 1939 American epic Gone with the Wind.

Many young Afghans today are nostalgic about that bygone golden era, when visual art was considered valuable.

The Mujhaideen and Taliban regimes brought cinema to an abrupt halt.  Starting in 1993, the production and viewing of films were banned by Afghanistan’s fundamentalist rulers. The Taliban marked their headquarters and checkpoints with rolls of loose film and cassettes dangling from bars.

It was a punishable offense to own a movie or a TV screen. Censors destroyed most films and songs in the hands of Afghan national radio and television, although art lovers managed to save a few examples by hiding them from authorities. Hemmed in by restrictive policies, most of Afghanistan’s prominent actors and film makers fled the country.

After the fall of the Taliban in 2001 and the establishment of  a transitional government, Afghan cinema returned from the dead.

Afghan-French writer and film director Atiq Rahimi (Eds – No relation to the author of this article) produced and directed two internationally acclaimed films: Earth and Ashes in 2004 and Patience Stone in 2012, both shot abroad but based on a story set in Afghanistan.

But fine arts, especially cinema and theater, have been neglected by the Afghan government and by international donors over the past 15 years. The gloomy prospects for visual arts discourage youth from contributing to the future of film-making.

Cinema is stigmatized and frowned upon in Afghanistan.

Although Kabul University offers some cinema courses, the content and quality are poor. Many students enrolled in the courses end up there after being rejected by other departments due to poor academic performance. Attending the faculty of cinema is frowned upon, and most private institutions in higher education do not offer cinema courses.

In all of Afghanistan there are only nine movie theaters. Generally they screen only second- and third-rate Indian films, and the clients are mainly male, often uneducated and unemployed youth.

Women and families do not go to movie theaters because they are poorly maintained and there is a social stigma associated with the cinema, which is widely considered vulgar.

“I have never visited a cinema hall, and I have no idea what one looks like,” commented Arizo, a 14-year-old girl from Kabul. “My parents say cinema halls in Kabul are not suitable for girls to visit.”

As a movie lover, I went to almost all of the movie halls in India when I studied there. Back in Kabul, one afternoon I felt an urge to check out the cinema scene, so I went to see a movie at the Ariana, a movie theater in the heart of the capital.

I bought a movie ticket, which cost me 50 Afghanis — less than one dollar.

Entering the cinema, the first thing I noticed were the noxious conditions: it was humid and stank of cigarette smoke, and there was garbage under the chairs. There were no females in the audience — even young children were unaccompanied by their mothers.

As law student Arslan Turani put it: ” I don’t visit cinema halls in Kabul because they are poorly maintained and they put outdated films on show.”

Alas, we are deprived of the meaningful, life-enriching stories unfolding on screen that Raskin lauded.