COVID-19 has forced billions of people into lockdown. Two survivors of earlier crises tell how solidarity and patience are antidotes to fear. 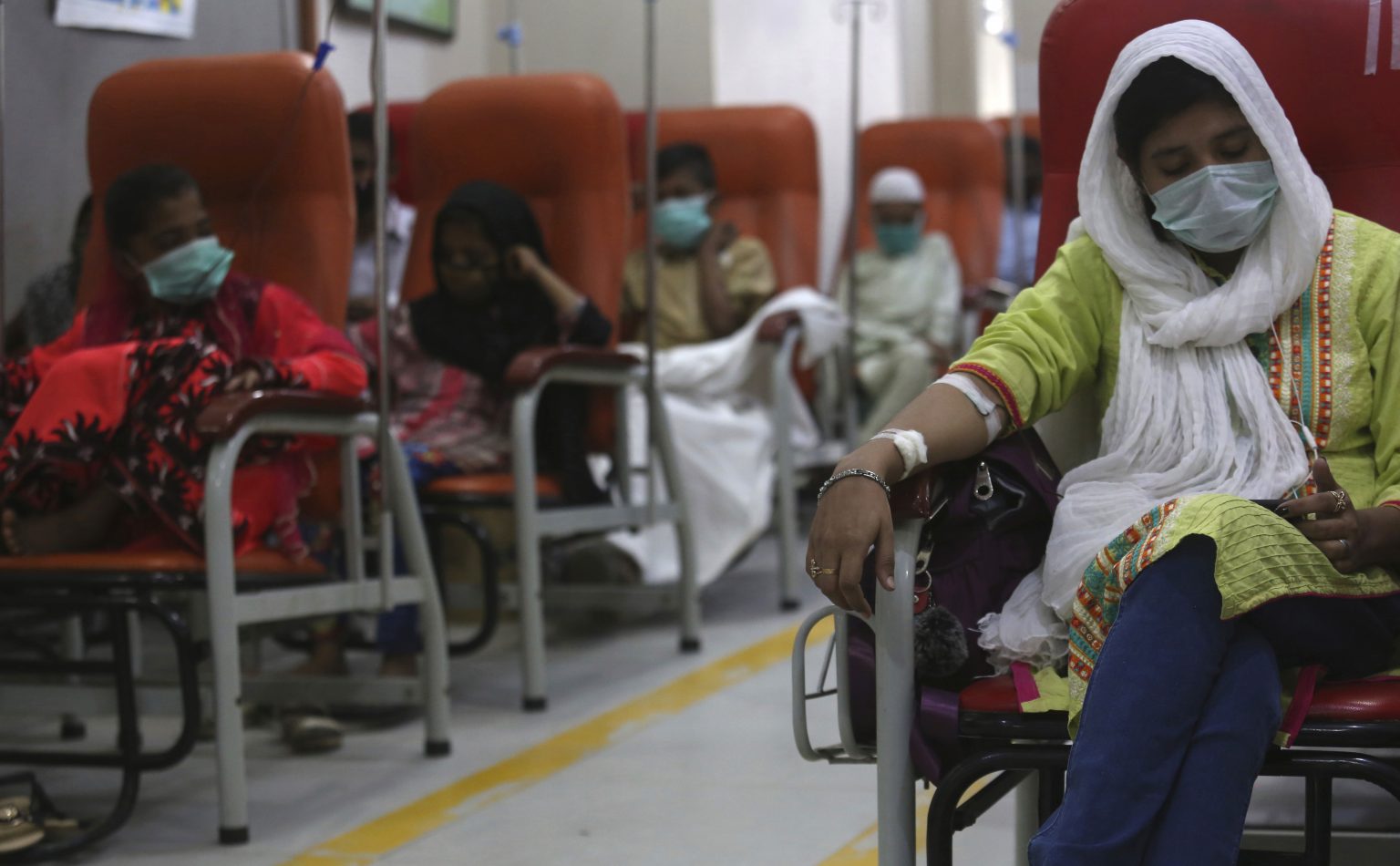 Patients receive blood transfusions in Karachi, Pakistan, 1 April 2020. A lockdown due to the coronavirus pandemic has created a severe shortage of blood donations in Pakistan. (AP Photo/Fareed Khan)

It’s a scenario familiar to many right now. All of this, a result of strict quarantine measures imposed by governments around the world in an effort to slow the spread of SARS-CoV-2, the new coronavirus, more commonly recognized by the disease it causes, COVID-19.

As people adapt to new restrictions on their daily lives, it’s hard to imagine things returning to normal or what that normal will look like.

This pandemic has caused a lot of fear and uncertainty. But so have other events in recent history.

News Decoder correspondent Malcolm Davidson was in the Pakistan capital of Islamabad in 1991 when then U.S. President George H.W. Bush announced the start of Operation Desert Shield, the combat phase of the First Gulf War in Iraq.

Malcolm: The first we knew the international school [which my kids attended] was closing for the foreseeable future was when we got a notice scribbled on a piece of paper ripped from a notebook.

We were in the Pakistan capital Islamabad. It was January 1991, and the American-led Operation Desert Storm was about to be unleashed on Iraqi forces that had invaded Kuwait the year before.

With the combat phase of the First Gulf War imminent, the United States  sent planes to Pakistan, and overnight they plucked all non-essential staff out of the country, including most of the teaching staff of the school.

For us and many other non-Americans, it was the beginning of several months of home schooling for our children.

A community under lockdown

It was also an eye-opening demonstration of how a community reacts to a sudden emergency.

It was very different, of course, from the coronavirus crisis. There was no danger of mass infection and death like now, but it showed how a community reacts to being locked up.

Saddam sold himself as the defender of the Islamic world against the Western domination of the Middle East. It was an idea believed by many. They began to use ritualised pictures of the Iraqi leader as the centrepiece of the wedding garlands that are made out of stapled banknotes and which are traditional presents at Pakistani weddings.

Because of fears that Desert Storm could provoke a huge backlash from ordinary Pakistanis, many foreign missions and aid agencies drastically cut back their activities and banned staff from leaving their homes or embassies.

The backlash never really came, but the restrictions stayed in place, leaving many stir-crazy after many days of inaction — not unlike the experience of millions today living in fear of coronavirus.

We’d been planning a house party for a while, though, and invitations had gone out well before the U.S. withdrawal. We decided to go ahead anyway but weren’t too sure how many people would turn up.

In the event, it was one of the best parties ever. The house and garden were thronged with foreigners and Pakistanis alike, all ready to have fun and put their day-to-day worries to one side, for just a while.

Savannah: Malcolm’s story reminded me of another example of community in times of crisis. Just a few months before the events in Islamabad in 1991, hundreds of British subjects were taken hostage during the Iraqi invasion of Kuwait. One of those hostages was my mother.

Jane: Women and children left [Kuwait], I think after almost five weeks, and the men didn’t leave until 12 weeks, three or four months after that, and they were used as a human shield. The guys, their lives kind of stood still in a vacuum.

Savannah: That was 1990, only a few months before Malcolm Davidson would find himself and his family under lockdown in Pakistan. At that time, my mother was a flight attendant for British Airways. Today, she’s a school teacher living in the U.S. state of Georgia, where she’s currently in isolation after the school where she works closed to prevent further spread of COVID-19. I asked her how the two situations compare.

Jane: It’s not as dire, you know, like I’m not in some hovel or anything, or my life isn’t imminently being threatened with gun fire or immediate death. You know, [when I was held hostage] the food went from being, you know, room service to, suddenly a buffet. And [all the hostages were] loading, like they’re doing now, loading their carts, and we’re like, “Come on! You know everyone else has got to eat!” I mean it was a silly thing, but, you know, you remember those kinds of things. It was the same kind of thing: people panic and, you know, you can understand but you can’t eat all that food at once.

Savannah: My mom was held hostage by Iraqi forces for five weeks. She spent three weeks in a hotel with other passengers and crew members before the hostages were separated into smaller groups and spread out around the country.

Jane: Basically they came for us. It was very, very frightening. Our plans to escape had started to be put into action, and sadly the person who was to call us actually, physically, couldn’t do it in the end. He thought it was the wrong move, so he didn’t call us. So, only two people escaped with the Captain and the First Officer and maybe the engineer. And as we went  downstairs with all our bags and our possessions, we handed over our passports, and I remember thinking, “I’m officially dead now. Because no one knows where I am. You know, this is my passport. I don’t exist anymore.” And literally we were taken in groups of 10-12 on a bus.

We hadn’t eaten. We hadn’t had water. We didn’t know where we were, and they were basically putting us into smaller groups. You know, they say when you’re in survival mode, look to your environment and make yourself somewhere safe. So we made somewhere safe. I cut hair. So, we made fun. We all pitched in, and, you know, we had the chef from the hotel, so we had good food. And he would boil the water and make sure that it was as clean as he could make it. And we had a doctor. We had like our own little routine, and, you know, occasionally we would have a shake down. They [Iraqi soldiers] would come in the middle of the night.

This went on probably for another two weeks, and things were escalating, and you knew that bombs could drop at any minute, but the only reason that they didn’t was because, now, they were afraid to drop bombs, you know, on British subjects.

Savannah: So, you’re in the state of Georgia. You’re in a suburb outside of Atlanta. There’s a lot of panic going around. I’m sure you’ve seen a lot of people hoarding food, stocking up. What would be your advice to people experiencing this panic?

Jane: Don’t panic. Just don’t panic. We will get through it. I think the worst part — I’ll be brief — is that you don’t know how long it’s going to last. It’s that never-ending-ness. That’s, really, I think where the panic starts. That unease of, “Oh my god, how long is this going to go on?” We don’t know.  Some people haven’t taken it seriously, and they’ve gone out and they’ve done their thing and they’ve got sick or they’ve passed it along to somewhere else. You have to take it seriously.

Savannah: Just as life carried on for Malcolm and his family in Pakistan, my mother and the other hostages made it safely back to Europe. Thanks to a secret phone line they kept hidden from their captors, they were prepared when the day came for them to leave. They were transported to Baghdad and left at the airport, finally free to return to their lives.

Savannah Jenkins is News-Decoder’s Communications Manager. A dual American-British citizen, she completed a double major in International and Comparative Politics, History, Law and Society at the American University of Paris. She initially joined News-Decoder in 2018 and has experience working for non-profit and for-profit organizations. Jenkins recently completed a stint volunteering in Greece, where she provided emergency relief to refugees.