Two directors of News-Decoder’s parent not-for-profit are launching a global award to honor news organizations that innovate with young audiences, and the student publication at the U.S. school where 17 people were shot dead in February will be a co-recipient of the inaugural prize.

The Eagle Eye newsmagazine at the high school in Parkland, Florida, and the U.S. online edition of Britain’s Guardian newspaper will receive the first Global Youth and News Media Prize for their joint coverage of a demonstration this year in Washington to promote gun control.

Student journalists from the Eagle Eye directed coverage of the March 24 demonstration for The Guardian, producing exclusive features, interviews and live reports from the student-led protest in support of tighter gun controls.

A month before the demonstration, a former student at Marjory Stoneman Douglas High School armed with an semi-automatic rifle killed 14 students and three staff members at the school in the southern U.S. state of Florida. It was one of the deadliest school massacres in the United States.

The March for Our Lives demonstration drew hundreds of thousands of protesters to the U.S. capital, including student leaders from the Parkland school, and spawned protests in more than 800 other cities in the United States and elsewhere in the world.

“This will be the last school shooting,” Marjory Stoneman Douglas High School student Emma Gonzalez said in a speech to cheering protesters in Washington, pleading for tougher gun regulations.

The award will be presented at News Xchange, an annual global conference for news executives set this year for November 14-15 in Edinburgh, to be hosted by BBC News and BBC Scotland. Along with News-Decoder, the prize is part of Nouvelles-Découvertes’ efforts to help young people become better global citizens.

Eleven Eagle Eye journalists provided live coverage, interviews and photography for the Guardian during the newsroom “takeover,” which was supported financially by donations to a Guardian series focusing on gun violence in the United States.

“These young journalists blew us away with their talent, their passion and their ability to fight cynicism with hope,” Jane Spencer, deputy editor of The Guardian US, said. “The project has inspired us to pursue new collaborations with young people, who look at the world’s challenges with fresh eyes.”

The citation on the award says the student work in the Guardian newsroom “provides a stunning example of a student takeover of a trusted news source that offers solid lessons for other newsrooms to dare to do something similar.”

The March for Our Lives event encouraged several other major news organizations, including the U.S. Public Broadcasting System,  to experiment with a takeover experience. 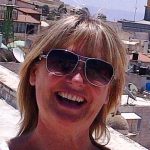 A 2016 study by the University of Rhode Island found that collaboration between student journalists and established news organizations strengthened the young people’s ability to separate fact from fiction.

This year’s honorary award will be followed next year by prizes, attributed by an international jury, recognizing several categories of contributions to strengthening both young people and organizations.

McMane has helped many news organizations engage with young people, including the World Association of Newspapers and News Publishers, the Community Media Forum Europe, the Newseum, UNESCO and media companies and associations around the world.