Letter from Italy: Reminders of a dark history

Few tourists enjoying Italy’s summer season realize the country has survived a dark history of violence that shook its foundations not so long ago. 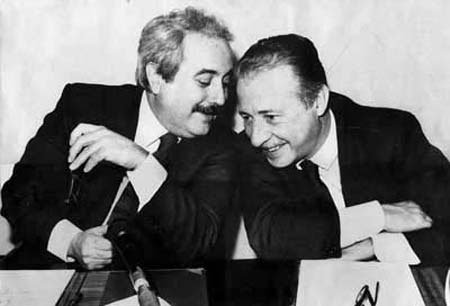 Tourists are pouring into Italy for the summer season, enchanted by its beautiful vistas and fascinating Renaissance cities.

But few of them will be aware that this tranquil modern country has survived a dark history of violence and terrorism that shook it to its foundations not so long ago and which still echoes today.

I was reminded of this by a commemoration held recently in Palermo, as it is every year, of the 1992 murders of anti-Mafia magistrates and friends Giovanni Falcone and Paolo Borsellino.

It is significant that Italy’s biggest modern heroes, well known to Italian children as well as the older generation, are not military men but two magistrates who died because of their unbreakable determination to defeat the Mafia on the front line in Sicily.

A photo of them smiling together still adorns many Italian city streets, and Palermo airport is named after them. In the famous photo by Tony Gentile, Falcone looks like the Mafia fighter from central casting, handsome with a black moustache, but the battle he fought alongside Borsellino was only too deadly.

Italy’s history was marked by the “Years of Lead.”

Falcone was killed on May 23, 1992, together with his fellow magistrate wife and three police bodyguards. A Cosa Nostra hit team buried half a ton of TNT under the motorway from Palermo airport into town, ripping up a long section of the road in a brutal attack believed to have been facilitated by a tip-off from complicit senior officials in Rome.

Borsellino died two months later as he rang the bell at his mother’s apartment block in Palermo. Another huge car bomb killed him and five police escorts.

The recent commemoration of these two men’s deaths was held in a court, known as the “bunker” in Palermo’s Ucciardone prison, specially built for a mass trial — which I covered — where Falcone scored a devastating blow against the Mafia.

Some 360 gangsters were sentenced to terms totaling 2,665 years after the court accepted his thesis that Cosa Nostra is a closely linked hierarchical organisation.

Italy’s history through the 1970s and 1980s was marked by the “Years of Lead,” a period of rampant left- and right-wing terrorism exploiting labor and social grievances that posed an existential threat to the republic.

During that period, more than 300 people, including former Prime Minister Aldo Moro, were killed in nearly 13,000 attacks.

In the early 1990s it was the turn of the Mafia to challenge the Italian state. These conflicts still echo, with many mysteries unsolved over official and foreign complicity.

The Calabrians have avoided head-on challenges to the state.

The murders of Falcone and Borsellino were followed in 1993 by unprecedented bombings against cultural and church targets in Rome, Milan and Florence.

Palermo prosecutors and Borsellino’s younger brother believe he was murdered because he was about to reveal secret negotiations following the Falcone killing between the government and boss of bosses Salvatore “the Beast” Riina to stop attacks against public targets in exchange for improved prison conditions and lighter sentences for mafiosi. They say the mainland bombings ended abruptly because a deal was reached.

A trial of senior police, government officials including a former interior minister, and gangsters for this alleged conspiracy has been going on in Palermo since 2013.

The prosecutors and Borsellino’s brother Salvatore say modern Italy cannot clear its conscience until the secrets of this dark hour are uncovered. Prosecutors also believe the trial could break a tradition of complicity, going back two centuries, between the Mafia and politicians.

The killings of Falcone and Borsellino provoked a backlash against the Mafia that ultimately resulted in the capture of Riina after 23 years on the run and the definitive weakening of the Sicilian mafia.

It has now been replaced by Calabria’s brutal ‘Ndrangheta as Italy’s most powerful criminal syndicate. The Calabrians, learning from the mistakes of their Sicilian cousins, have avoided head-on challenges to the state — perhaps a posthumous victory for Italy’s two modern heroes.