Disaster was awaiting Lebanon, its finances in tatters. Now a huge chemical explosion has compounded the crushing challenges facing the tiny but pivotal nation. 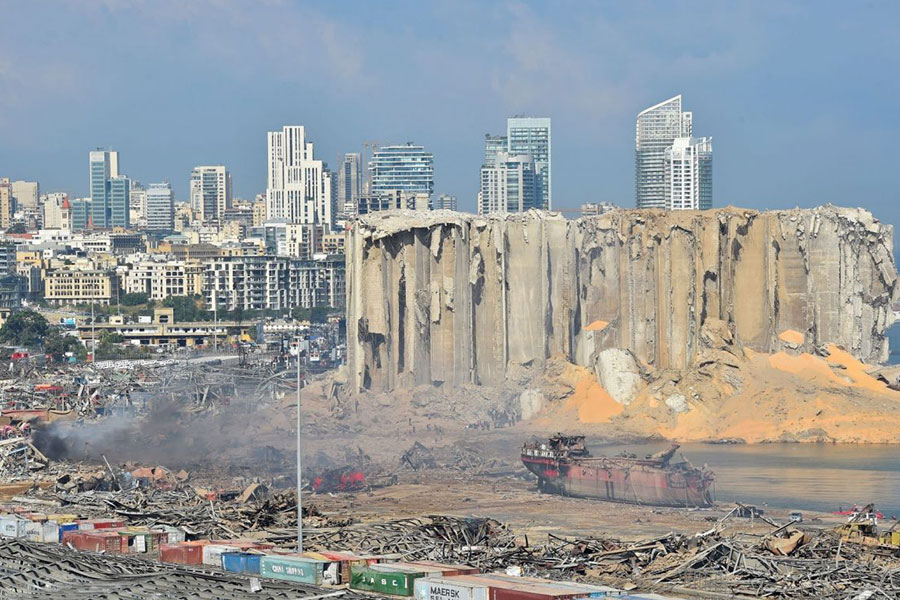 It is hard to imagine a crueller blow for Lebanon than the chemical explosion that tore through Beirut this week, killing at least 135 and injuring more than 5,000.

The seven million people of this tiny Mediterranean country were already reeling from a catastrophic economic meltdown, a new surge of COVID-19 infections and the unhealed legacy of a 15-year civil war.

The outside world is chipping in with humanitarian band-aids, but no serious help will be forthcoming unless Lebanon sets its own house in order.

The United States and Gulf Arab states are suspicious of Lebanon’s Hizbollah-backed government. The European Union is no longer ready to pour good money after bad. Talks with the International Monetary Fund (IMF) have so far gone nowhere.

Lebanon was already reeling before the explosion.

The Lebanese are no stranger to bombs, but the explosion on August 4 exceeded anything in living memory, as did the shock wave that ravaged the whole city in an instant.

Apart from inflicting horrific casualties, it wrecked countless vehicles and thousands of homes, smashing glass and blowing out doors. Many Beirutis were already struggling to survive and have no resources left for repairs or replacements.

Crime is already on the rise, and the damage may provide new temptations for thieves and looters, increasing fears of a slide into social breakdown and chaos.

The cause of the inferno was not militia excesses, Israeli air raids or Syrian bombardments as in the past, but human error. Or rather the criminal negligence of leaving a warehouse full of 2,750 tonnes of highly explosive ammonium nitrate in the Beirut port area for six years with no proper safeguards.

The port, which normally handles about 70% of Lebanon’s imports, suffered enormous damage, as did its vital grain silos, and is out of action for the moment, leaving the northern port of Tripoli to take up some of the slack.

The scale of contamination from the chemicals blasted across the area is as yet unknown. In theory, a costly and lengthy clean-up will be required.

Scapegoats for the explosion will no doubt be found, but the real culprits will go unpunished — the corrupt political elite whose misrule and paralysing disputes have driven the country to ruin. Not just to the brink, but over the edge.

Lebanon is in free fall, and the Beirut fireball symbolises the failures of the post-war state and of its venal and incompetent leaders.

After 30 years of so-called reconstruction, the Lebanese are still waiting for basic services such as water, electricity and safe garbage disposal. Public health and education are in dire straits. Environmental decay has accelerated.

In less than a year, Lebanon’s make-believe finances have collapsed, the government has defaulted on its debts, the currency has lost 80% of its dollar value and runaway inflation in an import-addicted country has driven the middle class into poverty, the poor into destitution and the young and talented into migration.

Business is at a standstill, with tourism and banking, traditional pillars of the economy, particularly hard hit.

Yet Lebanon’s leaders still refuse the reforms demanded by outside powers in return for helping the country out of its mess with an IMF-led rescue package. For those reforms would involve such alien values as accountability and transparency, and inevitably undermine their ability to plunder whatever is left of state resources.

Large-scale anti-government protests in the autumn toppled one government, but the economic crisis and the onset of COVID-19 snuffed out the “revolution” — and any immediate hopes of sweeping away the sectarian power-sharing system, captured and exploited by former warlords-turned-politicians and their offspring.

Ironically, the powerful Iranian-backed Hizbollah movement, once an outsider in the traditional Lebanese set-up, is now effectively its strongest supporter, in alliance with Christian President Michel Aoun.

The Shi’ite political-military force played midwife in the formation of the current government and apparently believes the status quo serves it best.

Hizbollah’s interests, inherently linked to those of its Iranian patron, stretch far beyond Lebanon. The militia’s fighters, along with the Russian air force, helped its staunch ally President Bashar al-Assad beat off rebels in Syria’s civil war.

Hizbollah, which began as a resistance movement to Israeli occupation of south Lebanon, plays a vital role in Iran’s confrontation with Israel and in pursuit of the Islamic republic’s ambitions across the Middle East, notably in Iraq.

Can the explosion shock Lebanon into reform?

Lebanon’s increasingly desperate and impoverished people may care little for such regional shenanigans, although its own diverse sectarian groups have habitually sought the help of rival foreign allies in the past.

While the ruling class deserves much of the blame for Lebanon’s plight, the Lebanese at large must perhaps take their share of responsibility.

Their votes have kept the same old faces in power for decades, and they have been quietly complicit in a system that traded those votes for favours from their sectarian chiefs, as state institutions withered away.

They have implicitly accepted arrangements that reduced them to subservient clients instead of citizens with rights and responsibilities. A single-minded focus on individual and family interests crowded out any civic sense.

It is tempting to dream that the fiery catastrophe that has befallen Beirut will shock Lebanon into embracing genuine political and economic reforms that will unblock much-needed billions in foreign aid and see it through pain to eventual recovery.

But don’t bet on it.