Learning diplomacy — to help the world

“The atmosphere blew me away.” Giuliana represented Denmark at the model United Nations and quickly learned the arts of diplomacy. 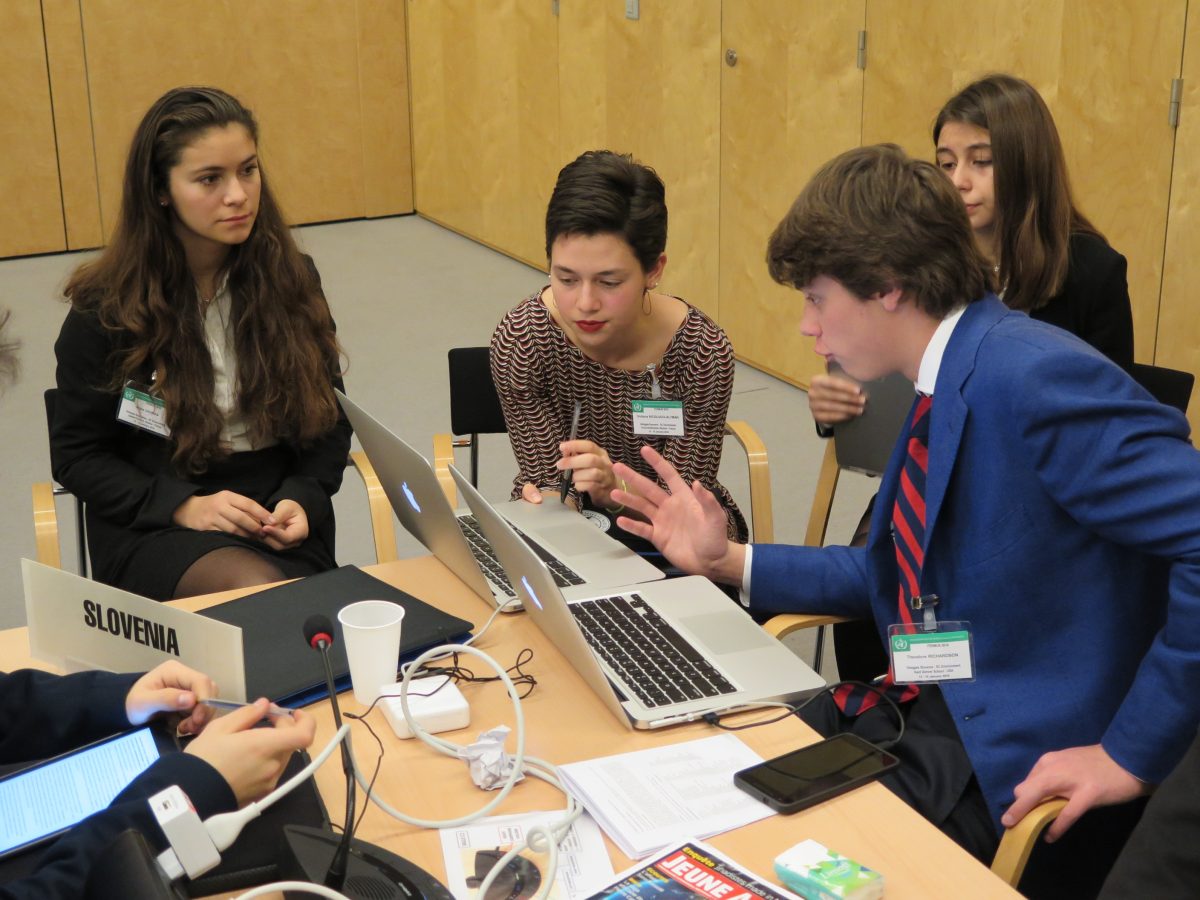 Here I am (center) with the delegations of Slovenia, Seychelles and Senegal. (Photo by Pascal Monteville)

I look at the hand-written ultimatum and glace sideways at the delegate of Iran. He is 16 years old and French, wearing a grey suit and a pale pink tie. He wants to extend the deadline of a resolution that I have just presented to the 60 other high school students who make up our committee of the Model United Nations.

He shoots me a smile. Without a compromise, he won’t vote in favor, and every vote counts. I grimace. An amendment must be presented to the entire committee, nerve-wracking enough the first time. Still, it might help my resolution win a majority vote.

I raise the note above my head, and an assistant passes it to the delegate of Iran. My heart pumping, I wonder if the same exchange might take place for real at the UN.

So it went at this month’s Model UN (MUN) in Geneva, where I was one of eight students representing my school in Rennes, western France.

The atmosphere blew me away.

MUN is a student-run organization that teaches the arts of diplomacy: writing resolutions, making speeches and negotiating agreements. The UN lends its conference halls in Geneva to the initiative.

I arrived with only some research on my assigned country Denmark and four months of immersion in French, one of the two working languages along with English.

The atmosphere blew me away. It was like being on another planet, surrounded by students from Senegal, Australia, Martinique, Kenya, Turkey, Morocco, Spain, the United States, Hungary, Saudi Arabia and elsewhere.

My committee focused on the environment, and we worked on resolutions to reach the goals set by the COP21, to tax carbon-emitting vehicles and to protect natural resources.

Once in the conference room, I surprised myself by quickly picking up on the formalities and the vocabulary. (To ask a question, you say, “Point of information.”) I relished the lobbying and writing.

After one day, I had learned enough to draft my own resolution.

My voice trembled when my turn came.

Suddenly I was surrounded by other delegations intent on partnering with me, each with its own contributions and opinions.

The delegate of Colombia spoke such rapid French that it took me almost an hour to understand that he wanted to add a clause on energy efficient public transportation.In the end, my team compiled a comprehensive resolution with 20 signatures, or 11 more than are required for it to be accepted by the chair.

My voice trembled when my turn came to read it in front of the whole committee. But the real challenge was the questions:

“And how is it that you plan on funding clause number two, on researching renewable energies?” asked the delegate of Japan in rapid French.

I stumbled through most of the questions. But when I went back up in front of the committee to submit the Iranian amendment, I felt calmer, and it was adopted.

Suddenly, there were too many nationalities to keep track.

When the final vote came, I could barely look around the room at the placards raised in agreement. As the room broke into applause, I smiled at the thumbs-up from the delegate of Serbia.

Sleep deprived and exhausted, I exited the UN building for the last time, through the main hall where we discussed international policies during coffee breaks. I recalled a moment when I had been talking to the delegate of Haiti, a Moroccan, and the delegate of Algeria, from Turkey.

We were speaking in a mixture of French and English, looking around the room at the delegates in their suits and formal dresses.

Suddenly, there were too many nationalities to keep track. It became a room full of high school students, laughing, chatting, all with the potential and intention to leave our world better than we found it.

Giuliana Nicolucci-Altman is a high school student from the U.S. city of Chicago. Currently she is attending the School Year Abroad program in Rennes, France. Passionate about writing, she hopes to become a published author. Her interests include international relations, the environment, new cultures and languages. She speaks English, Portuguese and Spanish, and is learning French.