It’s been a year since world powers signed a nuclear accord with Iran. This is not a good deal for the United States. 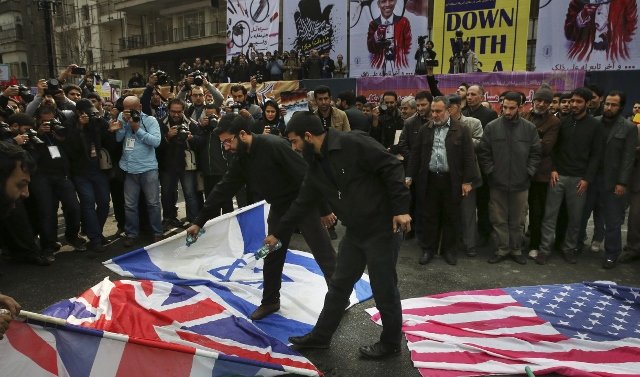 This is the first of two articles on the nuclear agreement signed in July 2015 between Iran and world powers. The accord aims to limit Iran’s capability to build nuclear weapons in exchange for the lifting of international sanctions on Tehran. Both articles were written by students at Greens Farms Academy in the United States.

It’s been less than a year since the United States and other world powers signed a nuclear agreement with Iran, and in Tehran chants of “Death to America” continue.

How could a deal with an enemy be good for the United States?

The simple answer: It is not.

The goal of keeping Iran from developing a nuclear bomb, which could threaten Israel, Sunni Arab states and Western allies of the United States, cannot be reached through the July 2015 agreement, called the Joint Comprehensive Plan Of Action.

The concessions that U.S. President Barack Obama made were the first mistake.

The original plan was to close Iran’s nuclear program entirely, but Obama and other world powers allowed fuel enrichment. What is more, under the agreement the International Atomic Energy Agency (IAEA) has to provide Iran 24 days advance notice before it can gain access to a nuclear facility.

The end of sanctions will pump billions of dollars into the Iranian economy.

Consider this: Iran can keep its nuclear history private. Although in the past the IAEA has discovered previous clandestine nuclear activities carried out alongside Iran’s officially declared nuclear program, the Obama administration agreed that Iran does not have to disclose past nuclear weapons work or fully cooperate with the IAEA before receiving sanctions relief.

So why is the lifting of sanctions by world powers including the United States — or “the Great Satan,” in the words of some Iranians — a bad idea?

The end of sanctions will pump billions of dollars into the Iranian economy. A nuclear program is harmless if it is broke, but by relinquishing sanctions, the United States stimulates both Iran’s nuclear program and its economy.

It might be acceptable to lift sanctions if the money were to reach needy Iranians, but it will probably used to fund militant groups such as Hezbollah or Syrian President Bashar al Assad.

The deal allows Iranians to study nuclear technology; lets Iran take 10 years to phase out centrifuges; and fails to dismantle any existing nuclear facilities or the Arak heavy water plant.

Although nuclear missile trade restrictions will remain in place, to be lifted within five years, other arms embargoes are removed immediately. In the end, we have weakened military restraints on Iran while limiting outside access to their bases.

A free pass on minor violations

All of this might be acceptable if we could punish Iran in the event it breached the deal, but we can’t. Why?

Because proving an eventual violation is so complicated, many infractions can go unchecked. And there is only one punishment: the major threat that crippling sanctions would snap back into place. That is a huge problem.

First, Iran would retain any gains it made in its nuclear program before sanctions were reimposed.

Second, world powers will be tempted to permit less significant infractions to avoid triggering the “snapback” provision. Any violation would have to be extremely consequential before the United Nations Security Council would reimpose sanctions, effectively giving Iran a free pass on small to mid-level violations.

It might seem counter-intuitive that the United States would allow such a lenient deal with Iran, which is a mortal threat to Israel, one of America’s oldest and strongest allies. If Iran obtained a nuclear bomb, which is much more likely now, it could be the end of Israel. That alone makes the deal bad for the United States.

Nearly a year after it was signed, the deal is not actually working, and the Obama Administration is ignoring this reality. As the head of Iran’s Atomic Energy Organization, Ali-Akbar Saleh, put it: “The only thing that Iran gave Obama was a promise not to do things we were not doing anyway, or did not wish to do or could not even do at present.”

The United States should have stayed firm and made a deal that protected its citizens and allies. Instead, we have Obama’s non-functioning disaster.

Shira Friedson is a junior at Greens Farms Academy in Westport, Connecticut, in the United States. She has always had a love for writing and is a Layout Editor of the school’s newspaper, The Beachside Press. She also has a particular love for politics and human rights, and is thrilled to be a News-Decoder Student Ambassador.