As Hiroshima survivors age and die, the city’s desire to preserve architectural memories of the atomic bomb grows stronger. 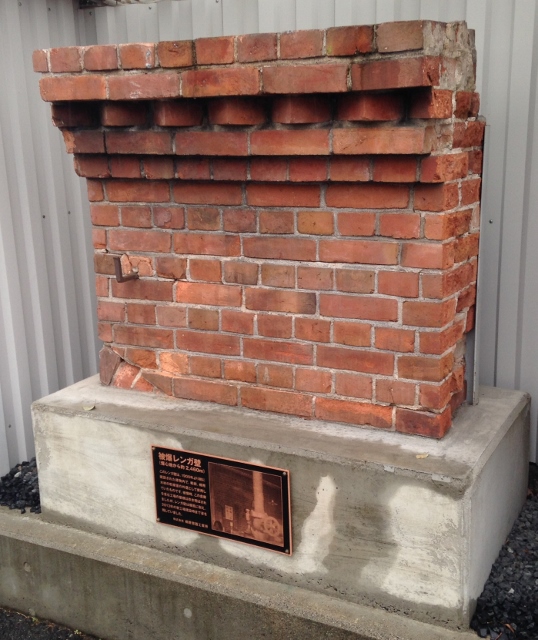 In front of the cardboard box factory stands a wall. It’s made up of a hundred or so red bricks, blackened in some areas, with a tiny metal hook protruding — a  remnant of a past life.

It’s not much. If not for the small plaque below them, one would never know that those bricks had survived an atomic bombing.

But for a determined group of Hiroshima residents trying to preserve the physical reminders of the attack, artifacts like this are reminders of what was there before World War Two, before the Bomb, which killed 140,000 people.

“From this small wall, you can’t tell how horrible it was,” the 45-year-old owner of the factory, Shinichiro Kirihara, says as he bends for a closer look at the bricks.

Kirihara is one of dozens of property owners in Hiroshima struggling to balance the desire to preserve the past with the pressing needs of business — and homeowners eager to clear away the old and replace it with the new.

The bomb demolished or critically damaged 92 percent of the buildings in Hiroshima.

Today, 86 buildings that braved the bombing still stand. With each year and the deaths of aging survivors, such buildings have grown in importance.

“The human survivors are getting old,” said Makoto Okinaka, a city engineer working on preservation. “Many will die — that’s human life. But when it comes to buildings, you can preserve them.”

The city government, which owns about 20 of the buildings, has no law that prevents private owners from knocking down their property. But Okinaka consults with owners about how to preserve them.

If a building can’t be preserved whole, the city encourages owners to preserve at least a piece.

Owners can leave behind original tiles, rooms in good condition, a wall — anything that withstood the bomb. As an incentive, the city pays three-fourths of the preservation cost, up to some $250,000. Okinaka said that, so far, 20 owners have taken the offer.

“It’s a way of preserving the experience of the atomic bomb in a physical way,” he said.

For one factory owner, business came before preservation.

Kirihara’s container material factory is an example. His great-grandfather opened the factory in 1900, producing barrels, paper bags and chemical products.

On August 6, 1945, when the United States dropped an atomic bomb on the city, the factory roof collapsed, but the rest of the building survived. Workers were injured, but no one died.

The building stood unused for 68 years, while the rest of the factory went on growing.

Finally, several years ago, Kirihara — who inherited the business — knocked the building down to build a warehouse. Business, he said, had to come before preservation.

“I know it’s important to retain remains of the atomic bombing,” Kirihara says. “But I have to keep my workers on the payroll.”

So he made a deal with the city to preserve a portion of the wall. The faded red brick wall, shielded by a corrugated steel roof, stands alone in front of the modern factory.

Over the years, attitudes towards preservation changed.

Hiroshima moved soon after the war to preserve the center of the city as a peace memorial, including the so-called A-Bomb Dome, the haunting remains of an industrial promotion center.

But the rest of the city was rebuilt as quickly as possible. Citizens wanted a fresh start, and many considered the remains of the bomb as painful reminders preventing Hiroshima from moving on.

Over the years, attitudes changed. In 1989, residents formed a Committee of the Preservation of A-Bombed Buildings. In 1990, the city passed a resolution to keep the structures standing, and in 1993, it started keeping a list of the buildings.

Akihiro Takahashi, a retired history teacher, has been an advocate for these buildings for over 25 years, bringing them to public attention.

“Whenever it becomes clear that there’s a plan to knock down one of these buildings, there is a pretty strong backlash among the people,” Takahashi said.

“Most people say they should do whatever it takes to preserve these buildings.”

There are many challenges. In a densely populated country, practicality often wins out. Ever-evolving building codes in earthquake-prone Japan make renovation more expensive than knocking down the old and building anew.

“You don’t see a single old building,” said Ran Zwigenberg, a historian at Pennsylvania State University. “Everything is new and beautiful. But on the other hand there’s no past.”

Takahashi said that it has become more difficult to communicate the experience of the atomic bomb as survivors grow old and die. In 10 or 15 years, these buildings may be the only physical evidence of the bomb left in Hiroshima, telling the stories that eyewitnesses no longer can.

“Through these buildings,” Takahashi said, “you can see with your own eyes what
happened on that day.”

Danielle Castonzo is a junior at Indiana University studying journalism and informatics with a concentration in Spanish. As part of her international reporting course, she spent a week in Hiroshima, Japan, in March 2015, conducting interviews and visiting a-bombed buildings for this story. In her free time, she enjoys running, working on her podcast, hiking and exploring new places.