Elections in Hungary will be a bellwether for the world

Hungary opened the first cracks in Soviet Communism. Now, the world awaits its elections pitting a right-wing populist leader against a liberal opposition. 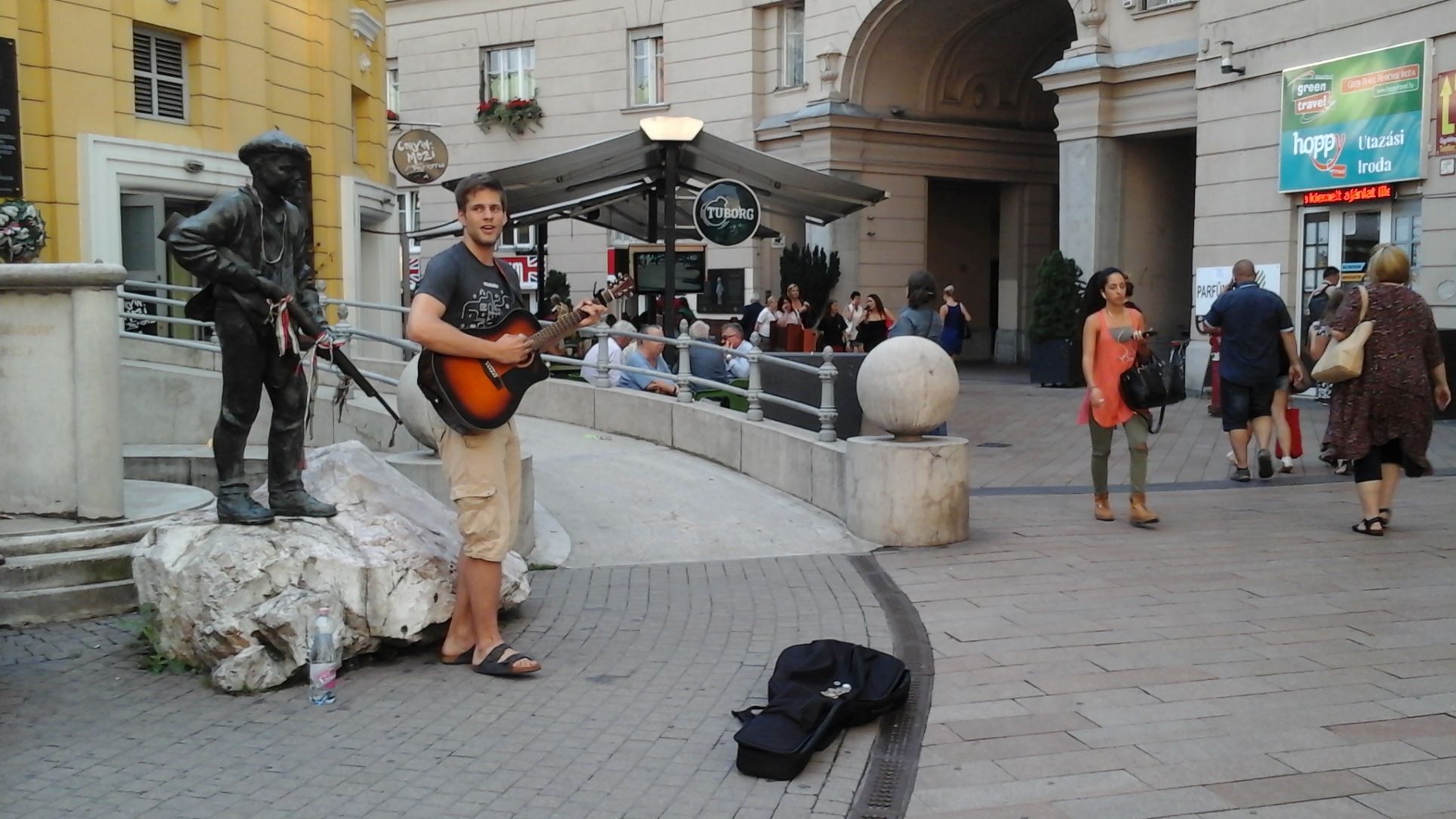 A street performer in front of a statue commemorating the “Lads of Pest” — youngsters who took up arms against Soviet occupiers, Budapest (photo by Helen Womack)

October is the month when Hungarians think back to their desperate attempt to throw off Communism in the Uprising of 1956.

In Budapest’s Corvin Alley, students busk by the statue to the Lads of Pest, remembering that many who resisted Soviet tanks were just teenagers and some were executed for it.

János Boris was 12 when he witnessed the uprising in which some 2,500 Hungarians and 700 Soviet soldiers died. János saw Hungarian snipers killing Russians. “They were the ‘enemy,’ but still I felt sorry for them,” he said.

Boris also saw the bodies of secret policemen hanging from lampposts. They were easy to identify because they wore standard-issue, mustard-coloured shoes. “But some people were unlucky to wear yellow shoes, and maybe they had nothing to do with the AVH,” he said, referring to the secret police force in Hungary when it was under Soviet control.

Now, this is history. In 1956, the West — busy with Suez, another crisis of that year — abandoned Hungary to its fate, and the little country that was yearning for freedom fell back under Communist control until 1989.

Next year’s elections are a bellwether for the world.

Today Hungary, where the first cracks in the Communist system emerged, leading eventually to freedom for the whole of Eastern Europe, has become one of the most conservative members of the European Union, clashing with Brussels over democratic rights and the rule of law. It is led by Viktor Orbán, an unashamed populist.

Elections next year could show whether liberal values still count for something or right-wing populism has won the day. As a barometer for political tendencies across the world, Hungary has a signifance beyond its size as a country of just under 10 million people.

Hungary is split, but unlike in Russia or Belarus, with their forever presidents and dubious elections, there’s a sense here that there is still something to play for.

Prime Minister Orbán, who started out as a liberal in the 1990s but now calls his government “illiberal,” has been in power since 2010. Free market capitalism, national sovereignty and Christian, family values are his recipes for Hungary.

Practical and plain-spoken, he appeals to many Hungarians. He rolled out Chinese and Russian COVID-19 vaccines because the EU was slow in delivering Western ones. Saving lives, not politics, was what mattered, he said.

But corruption and the erosion of rights are growing issues. The six fractious parties of the opposition have agreed to field a single prime ministerial candidate against Orbán in the spring of 2022. Topping the list after a first round of voting to select this candidate is Klára Dobrev, a pro-EU politician who could potentially become Hungary’s first female prime minister.

Opinion polls put Orbán’s Fidesz party at 37% and the joint opposition at 39%.

Many in Hungary believe Orbán is protecting them.

Having taken a hard line on migration and all but expelled a liberal university from Budapest, Orbán is now making “child protection” an issue. A new LGBTQ law limits teaching about homosexuality and transgender topics in schools. Liberals see it as an open invitation to harass the gay community.

“Orbán always needs an enemy or scapegoat. Now it is the LGBTQ community,” said Judit Vertes, a language teacher. “I do not think he is an avid homophobe. He has no convictions. The main thing is to stay in power at any price. If, in order to do that, he needs to pass a homophobic law, he will do it without a second thought. He doesn’t care if it destroys people’s lives.”

Orban expressed his own views recently: “We do not allow room for any kind of sexual propaganda targeted at children.”

Asked why Hungarian politics matter for the wider world, Vertes said: “The more bad examples we have, the easier it is for tyrants to follow them. Orbán is copying what is happening in Russia. Dictatorship is like a virus. Bad examples are infectious.”

János Boris, now 77 and a writer and translator, is also critical of Orbán.

“All his rhetoric about defending Christianity and family values is sheer posturing,” Boris said. “At the same time, Orbán has an uncanny ability to speak in a language many Hungarians love to hear.”

Boris continued: “The rural masses, where Orbán’s hard-core support comes from, get nothing but government propaganda. They live in a virtual world, in which the country is constantly under siege by armies of migrants and schoolchildren are in danger of changing their gender against their will — all things that Brussels wants to force upon us Hungarians but Viktor Orbán protects us from.”

“I’m afraid I have lived my whole life in interesting times,” the 1956 veteran said. “’Interesting’ in the sense of the Chinese curse, ‘May you live in interesting (i.e. turbulent) times.’”