Djenab: Helping girls get an education

“I’ve been blessed with amazing teachers and a supportive environment. I want to do all that I can to help make that a reality for more colored girls.”

When I was six, an older classmate at boarding school in Beijing told me a scary story: long ago, a girl died in the school. Her ghost haunted the drains, and when another little girl was squatting over the toilets (the norm in most of China, especially back then), that same ghost rose up and pulled her into the dark stinky hole, where she also died.

The story she told me was much more elaborate and detailed, but suffice to say, from that point on, I became fascinated with toilets and bathrooms.

It wasn’t until I studied abroad in France in college that I decided to do something with this perhaps weird obsession. Finding a (free) public bathroom in Paris was extremely difficult, and I decided to document my experience by starting a toilet blog, The Porcelain Goddess.

While the blog didn’t last long (America’s toilets were too spot on), I still pay lots of attention to toilets and bathrooms. And who’s to say I won’t start it up again? For a while, my family and friends would send me pictures of toilets, and I still have quite a few on my computer.

Between the ages of of zero and six, I think I had more frequent flyer miles than many people do their entire lives.

My mom is Chinese, and I was born in Beijing. My dad is from Guinea, and my parents owned an import-export business, so there was a lot of traveling back and forth between China and different West African countries — mostly Guinea, but also Mali and Côte d’Ivoire. 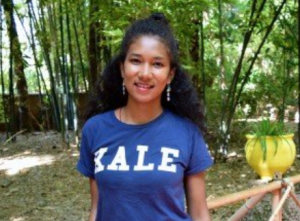 I spent half of first grade in the South of France, and the other half in a Chinese boarding school. I met a lot of different people and saw life from various lenses.

When I was seven, we moved to Columbus, Ohio, where most of my primary and secondary schooling took place, but I always knew there was much more to the world than suburban America.

I have always been interested in international affairs, and I am always thinking about myself in relation to others in the world. My recent degree in psychology contributes, too. When I read Half the Sky, by Nicholas Kristof and Sheryl WuDunn, a year and a half ago, my world outlook was changed. I have always loved embarking on new experiences and interacting with people, but now there was a higher purpose.

As a young blackish woman, had my parents not made the decision to come to America, and had I grown up in China or Guinea instead, my life would be so different, and unfortunately, not for the better. This fact spurs me to work hard so that I can help other young girls get an education and work towards their dreams too. I’ve been blessed with amazing teachers and a supportive environment, and I want to do all that I can to help make that a reality for more colored girls.

Working with GlobalGirl Media in Morocco right now, before going to law school, is just the beginning for me.