Giavanna Bravo of Greens Farms Academy has won our “Decoder in the Spotlight” award for her multimedia contributions and leadership. 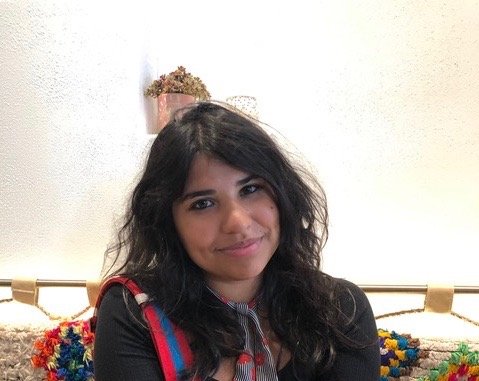 She produced a podcast, took charge of a webinar and guided her peers as our Student Ambassador. And she’s already looking ahead to 2019-20 with News-Decoder.

Giavanna Bravo of Greens Farms Academy (GFA) has won News-Decoder’s “Decoder in the Spotlight” honor this month for her outstanding contributions to the News-Decoder community.

You may have listened to her podcast on the privilege of being able to vote and how youth can have an impact on future elections. Bravo interviewed her classmate Abby Everett, a young activist who ran a voting registration booth for 18-year-olds at their school ahead of U.S. midterm elections last November.

Too young to vote themselves, Bravo and Everett are nonetheless passionate about politics. Bravo plans to study International Relations in college and is interested in becoming an international lawyer.

Everett organized the voting registration booth together with Charlotte Cohen, another student in News-Decoder’s branch at GFA. Cohen produced a photo series on youth activism for News-Decoder.

GFA’s multimedia content preceded a webinar on the future of democracy at the end of March. Bravo helped organize the session, which featured four fellow classmates and students at Indiana University, another News-Decoder partner institution. The students examined how modern forces, including globalization and populism, are threatening democratic principles around the world today.

The GFA students presented their research this month at the school’s 8th Annual World Perspectives Symposium. News-Decoder founder Nelson Graves moderated a panel discussion and later held a workshop with the students on interviewing.

For the past four years, News-Decoder has engaged with the school’s World Perspectives Program, which gained momentum under the leadership of former head of school Janet Hartwell, who is now a member of News-Decoder’s board.

Giavanna Bravo was instrumental in planning and coordinating both webinars this year, and she contributed to an Instagram “takeover” by GFA during Graves’s visit to the school in April.

Bravo recently answered questions about her role as a News-Decoder Student Ambassador and her future plans.

Q: Have you found News-Decoder to be useful, and if so, how?

Bravo: I have found News-Decoder to be useful in allowing me to learn more about journalism. I know how to properly write an article as well as create a podcast after this experience.

Q: You reported on the future of democracy, one of News-Decoder’s eight themes. How did News-Decoder help you connect this big issue to what’s happening in your part of the world?

Bravo: Prior to reporting on the future of democracy, I was aware that many countries are facing crises with their elections and social media interference. I am very aware of America’s move towards limiting democracy, but I think that I have been given the opportunity to see the issue on a more global level.

Q: What do you consider to be the world’s biggest problem right now?

Bravo: I don’t think that there is one single issue. I find that there are multiple. I would say climate change and lack of education for girls are two issues on my radar.

Bravo: I am currently working on a follow-up story for the Venezuelan conflict on The Kids Are Alright. I hope to delve into the aid that is trying to help those suffering from this conflict.

(Bravo will be reporting in one of our episodes of season two of The Kids Are Alright, a joint podcast produced by News-Decoder and our media partner, Podium.me. The podcast will be released in autumn 2019.)

Alexandra Gray is News-Decoder’s Community Engagement and Business Development manager. She develops creative marketing and communications content, manages social media accounts and works closely with the Student Ambassadors. She has a master’s in marketing from the University of Edinburgh and spent one year of high school at one of News-Decoder’s partner institutions, School Year Abroad Italy.

Share This
Students in the SpotlightDecoder Spotlight: Giavanna Bravo of Greens Farms Academy