Britain: In or out of Europe?

Britain has been a member of the European Union for 43 years. But the commitment of its people has never been whole-hearted. In a few months time, voters will decide whether to stay in or leave.

A decision to quit the 28-member EU — “Brexit” — would alter the future for both the United Kingdom and Europe.

The UK would be the first country to leave the EU since it was established as the European Economic Community in 1957. This would be a huge blow to the long-term European project to remove national borders, broaden prosperity and end centuries of wars.

That effort is already under strain as a result of arguments over the influx of migrants from the Middle East, as well as over how to handle financial problems like those of Greece.

Britain’s departure would not only undermine Europe’s cohesiveness but could actually break up the UK itself: pro-European Scotland could opt for independence, ending a 309-year-old union with England.

Fractious and volatile politics in the UK mean that the outcome is unpredictable. Opinion polls, though fluctuating, indicate that the referendum will keep Britain in the EU, but only by a narrow margin.

Many members of the ruling Conservative party — especially those further to the right — have long been suspicious of Europe in general and of the EU in particular. 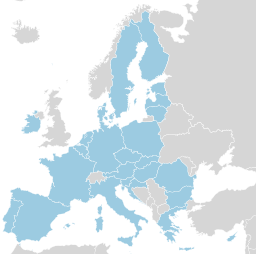 Anti-EU campaigners decry what they see as a loss of sovereignty to bureaucrats in Brussels. They believe Britain would be better off and a stronger power if it were freed from EU regulations. They also want to reduce immigration drastically.

Euroscepticism is not a new phenomenon. After a Conservative government took Britain into Europe in 1973, a Labour government called a referendum in 1975, in which membership was supported by two thirds of the voters.

The government of the day backed staying in, although some government ministers dissented — as is likely to occur again this time.

Since the days of Margaret Thatcher, who had famous arguments with other European leaders in the 1980s, the Conservative party has been riven by internal dissension over Europe. Labour has remained pro-European, but there are limits to its enthusiasm: It kept Britain out of the common currency, the euro, and out of the Schengen agreement on borderless travel.

Two factors have brought the issue to a head and forced a second referendum. The first was the creation of the UK Independence Party (UKIP), which gained such momentum that it won 12.6% of the national vote in the 2015 election.

Threatened by defections to UKIP, Prime Minister David Cameron was forced to make concessions to his anti-European wing. The biggest of these was a promise to hold a referendum on EU membership.

The second factor has been the rush of migrants into the UK from eastern European countries, taking advantage of the EU’s principle of free movement in order to secure jobs. Since EU membership was expanded eastwards in 2004 after the end of the Cold War, the proportion of the UK workforce born elsewhere in the EU has risen to 6.7% from 2.6%, totaling 2.1 million.

With opinion polls showing immigration to be among the electorate’s top concerns, anti-Europeans have put it at the center of their campaign.

The prime minister’s strategy has been to negotiate a “new deal” that would improve the terms of the UK’s membership and thus bolster the argument for staying in.

Cameron has sought to reassert the authority of national parliaments and to make it clear that Britain is not bound by the commitment to “ever-closer union” expressed in the EU’s founding treaty. He wants to ensure that staying out of the 19-member euro zone would not lead to Britain being treated unfairly.

Other EU leaders, wanting to prevent Britain’s exit, have acceded to most of his modest demands but are still arguing over his contentious attempt to limit benefits that new migrants can claim from the UK welfare system.

This is sensitive for the governments of the eastern member countries. But a compromise seems likely to be reached, enabling Cameron to claim victory and to put his weight behind a vote to remain in the EU.

Still, Cameron faces a problem: The referendum pits emotional, chauvinist assertions about regaining sovereignty — appealing, perhaps, but hard to back up with evidence — against rational arguments that do not inspire popular passion. It is not inspiring to make the common-sense argument that “on balance, we think Britain is better off in Europe in spite of the EU’s flaws”.

Here’s an example: anti-Europeans assert that Britain would be able to negotiate just as good terms with trade partners if it left the EU. Logic suggests, however, that a 508 million-strong single market is in a better position to do this than a single nation, albeit a large, prosperous one with 65 million people.

But rational argument will not stop Britain’s anti-Europeans. Like the ancient King Canute, they will continue to want to turn back the tide. We will soon find out whether they can be more successful than he was in altering the course of history.

Alexander Nicoll is a writer on defense and European issues. From 2003 to 2015, he was on the staff of the International Institute for Strategic Studies, where he was editor of the London think-tank’s annual review of international affairs. Previously he spent 18 years as a reporter and editor at the Financial Times, including as defense correspondent from 1997 to 2002. He began his career at Reuters as a correspondent in Hong Kong, Paris, Tehran and New York.