The presidential candidacy of an outspoken populist in Brazil is a sign that Latin America’s biggest nation is still struggling with corruption and poverty. 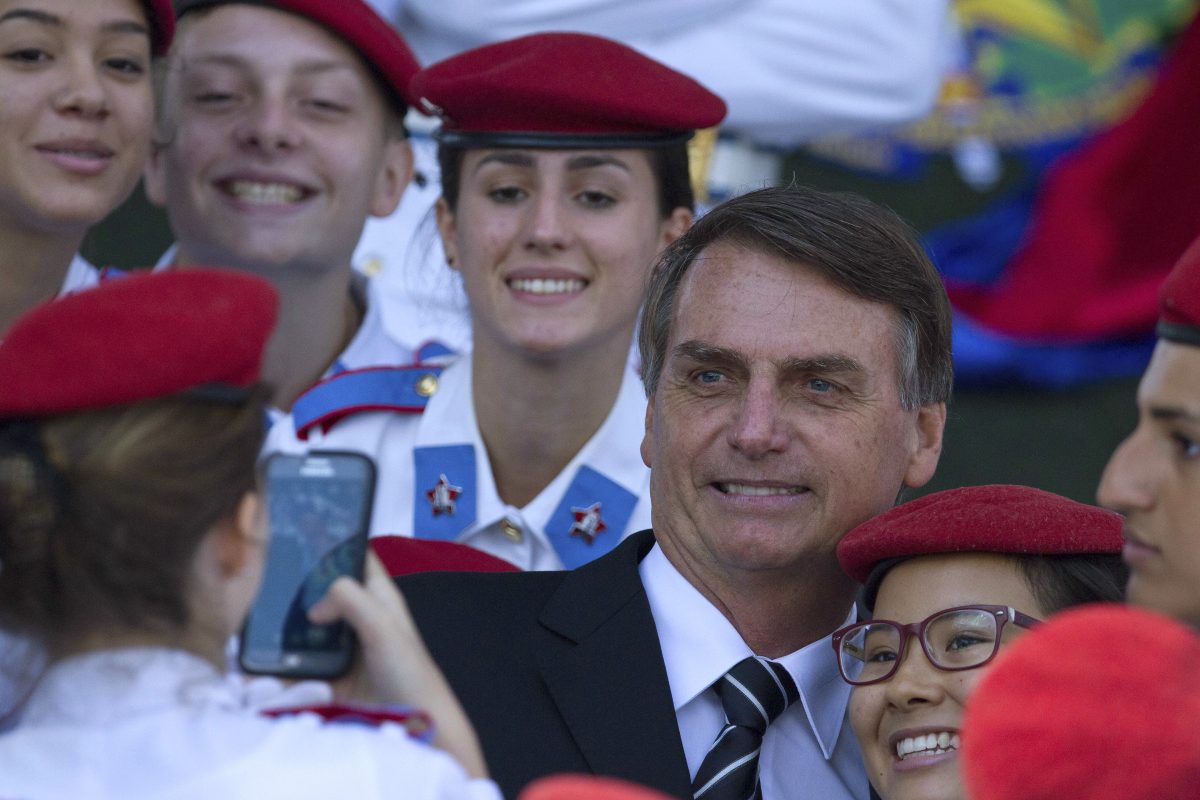 Promising to turn back the clock to a safer, simpler time, a populist figure derisive of “political correctness” rides a wave of disillusionment with the establishment to the presidency of a major Western nation.

It happened in the United States. Could fellow hemispheric giant Brazil be next?

In truth, Jair Bolsonaro, who has risen rapidly to vie for second place in early polls ahead of Brazil’s 2018 presidential election, makes Donald Trump seem like an exemplar of moderation.

The 62-year-old conservative lawmaker and former army captain has said black protesters should “go back to the zoo,” said he wouldn’t rape a congresswoman because she wasn’t “deserving,” called for gay children to be beaten and routinely lionizes Brazil’s 1964-1985 military dictatorship.

Bolsonaro is part of an increasingly potent bloc of evangelical Christians in Congress and a rare politician who has not been ensnared in a massive corruption probe called Operation Car Wash that has put dozens of top politicians and business leaders behind bars.

He remains an outside shot for the presidency, but his rise is a stark sign of how years of economic and political tumult in Latin America’s biggest country are combining dangerously with a global trend towards nationalism and intolerance.

A painful, three-year-long recession has exacerbated a political crisis.

In the first decade of this century, the multicultural nation of 200 million saw its economic and diplomatic influence surge as it rode a commodities boom under President Luiz Inacio Lula da Silva, who rose from peanut-selling poverty to become its first working-class leader.  More than 20 million people rose out of poverty, lifted by a roaring economy and a historic expansion of the social safety net.

With its robust media, entrenched freedoms and respected electoral process, Brazil has been a democratic beacon for many Latin American neighbors and emerging economies globally.

But a painful, three-year-long recession has exacerbated a political crisis that saw mass anti-corruption protests in 2013, the successful impeachment of left-wing President Dilma Rousseff last year and the unprecedented Car Wash anti-graft crusade. As in Britain, France and the United States, political discourse in Brazil has become more polarized and traditional political parties have been weakened.

Current President Michel Temer’s approval rating has slumped to below 10 percent as his unelected interim administration plows ahead with unpopular austerity measures. A third of his cabinet members are now being investigated under Car Wash, which unearthed huge kickbacks and bribes by construction firms in return for contracts at state-run oil company Petrobras.

“The longest, deepest recession on record has left Brazilians poorer and angrier and looking for a savior who can stop the bleeding,” said Brian Winter, vice president of Americas Society and Council of the Americas. “They are looking around for somebody clean and finding only Jair Bolsonaro, who is actually a far more divisive figure than Trump on matters like LGBT rights and immigration.”

Intolerance and violence towards the poor and minority groups have long plagued Brazil, despite its common image abroad as the sunny land of Carnival and racial harmony.

Such incidents have risen sharply in the past few years. Brazil is by far the deadliest country for trans and other gender diverse people, with 802 killed in 2016, according to the Transgender Europe group.

In Bolsonaro’s base of Rio de Janeiro, violence has returned to levels in 2008 before the start of a much-touted program to “pacify” the slums that are home to millions of poor Brazilians as well as vicious drug gangs. Last year, the notoriously violent Rio police killed 920 people, up from 419 in 2012.

Lula’s legions of supporters hope he will return to the presidency next year for a third term, bringing with him the Midas touch that saw Brazil go from strength to strength until he left office in 2011 with an 87 percent approval rating.

But his candidacy is now hostage to Car Wash. He is facing five charges of corruption, which he denies, and conviction on any of them followed by an unsuccessful appeal would prevent him from running.

The 71-year-old national icon leads current polls easily, and his God-like status among working and lower-middle class Brazilians means that his chances of a presidential second-coming cannot be underestimated. But he would inherit a far more economically-strapped and divided country — polls show that he has the highest rejection rate of any candidate.

If he is convicted, it could leave the race open to Bolsonaro or others to exploit the political vacuum and appeal to many Brazilians’ desire for a “strong” leader to restore order from chaos.

Another leading contender for the mantle of clean hands, outsider status in the presidential election could be recently elected Sao Paulo mayor Joao Doria Jr, a wealthy businessman and former host of Brazil’s version of The Apprentice television show that boosted Trump.

Many hoped that the sprawling Car Wash investigation would usher in a new period of transparency and good governance in Brazil, which despite its progress this century has been held back by chronic problems of red tape, corruption, government waste and impunity.

But Car Wash has itself become politicized, with critics accusing it of being part of a grand plot by elites to unseat Rousseff and stop Lula from leading the nation again. Sergio Moro, the youthful judge who has masterminded the operation from the southern city of Curitiba, has become a full-fledged celebrity who runs high in presidential polls. (He says he doesn’t plan to run.)

The prospect of Brazil emerging stronger from the crisis remains intact, but there are real risks of darker consequences – as Bolsonaro’s ascendancy shows.