She grew up in Venice, enjoys writing and has won funding to try her hand in journalism. Meet Tania Bagan, News-Decoder’s 2017 summer intern. 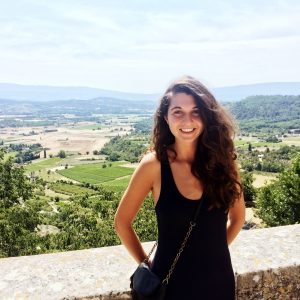 She grew up in Venice, enjoys writing and has won funding from a top U.S. college to try her hand in journalism.

Bagan has been awarded a summer internship grant from Haverford College, where she is finishing her third year of study, focusing on comparative literature.

“I’m interested in journalism because we live in an era in which so much inconsistent information can be accessed and spread, and organizations like News-Decoder help spread facts in a clear, explanatory, objective manner,” said Bagan, who earlier this year wrote an article for News-Decoder on immigrants in Italy.

Bagan was born in San Francisco and moved to Venice when she was five, before returning to the States 13 years later to attend Haverford, a liberal arts college near Philadelphia.

She is fluent in English, French and Italian, and will be working for six weeks in Paris for News-Decoder starting in mid-June.

With one year left at Haverford, Bagan is not sure what she will do after graduation, although she is interested in writing, publishing and law, and plans to remain in the United States. If she sticks with writing, she will be following in the footsteps of both of her parents.

During her stint at News-Decoder, Bagan will contribute to our series of “decoders,” examining controversial international themes and issues, and help solicit articles from our correspondents and guest writers.

“At News-Decoder, I hope to learn how to recognize trustworthy sources from non-trustworthy sources,” said Bagan, who looks forward to deepening her understanding of international affairs — something she, like many young people, finds difficult “when I’ m caught up in the small world immediately around me.”

Bagan is receiving funding from the Andrew Silk Journalism Fund, which encourages students to pursue work experience in journalism. It comes from the Silk family and is in honor of Andrew D. Silk, a U.S. journalist who died of cancer in 1981 at age 28.

News-Decoder’s fourth intern, Bagan follows in the footsteps of Pauline Bock, who writes for the New Statesman in London; Jasmine Horsey, who has worked at the Wall Street Journal and Elwin Street Productions; and Emma Bapt, who is studying at King’s College London, where she leads the News-Decoder club.