We are here because of a shirt!

My shirt was an act of defiance against anyone who believed I couldn’t be Igala, Muslim and feminist. I never dreamed my father would disapprove. 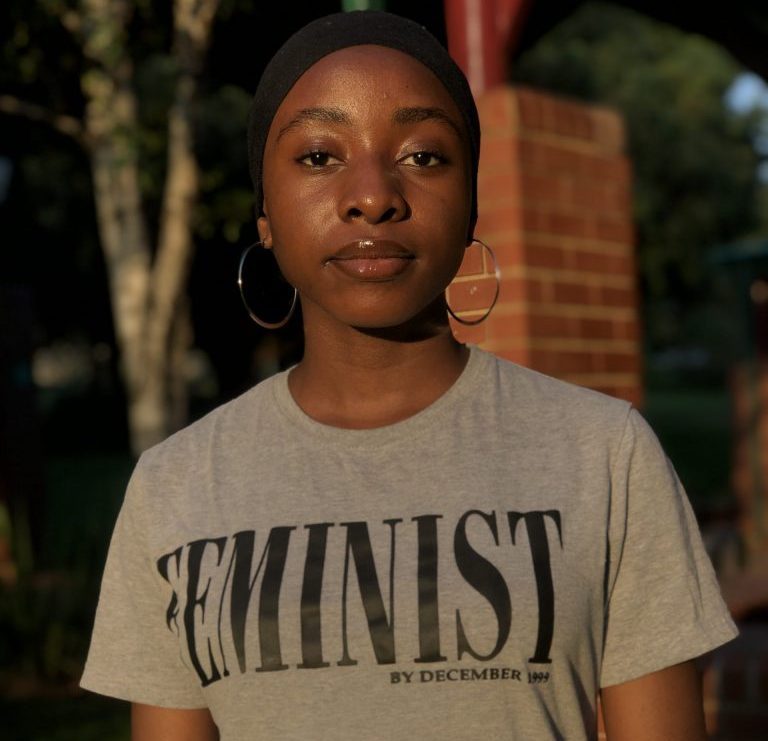 Fatima Ugbede Yunusa in her shirt

Something was wrong. As I walked into the room, seven pairs of eyes snapped to me. Daddy rarely called the entire family together.

“I called you all here to report Fatima to you, because things are getting out of hand,” he said.

I froze. What had I done?

“I know about the speech you made,” my father said. “I did nothing because I thought you’d outgrow it. But now, you want to wear a shirt that tags you as a feminist!”

Oh my God, this is about the shirt!

Before the school year had started, Daddy had asked me to select some clothes from his friend’s shop. He would pay for them and collect them on his way home. At the shop, I chose a t-shirt with the word “FEMINIST” printed boldly across the chest.

I was already vocal about my feminism, but the shirt excited me because it was an act of defiance against all those who believed I could not be Igala, Muslim and feminist at the same time. I couldn’t wait to see their faces when I walked down the street and into family gatherings in my new shirt and hijab, daring anyone to question me.

‘What is this feminism thing?’

In my excitement, I’d never considered the possibility that my father would disapprove. He hadn’t always been the most enthusiastic about my “foreign ideologies.” But it never occurred to me that demanding the same rights, respect and opportunities as any man was radical enough to warrant an intervention.

“What is this feminism thing?” he would ask, prodding me to share my thoughts, as if by doing so I would see the absurdity in them.

Whenever I started to respond, he would interrupt me in mid-sentence and counter with a comment. “This thing doesn’t make sense.” “God created men and women differently.” “You think you are too smart.”

I began to sob and looked at my mom. Mummy, say something. Say something please, my eyes implored as they welled up with tears.

“Listen to your father,” she said, looking away. It hurt. Could anything be more painful than being put on trial by the people you love?

My father wasn’t done, though. “You think you’re a white woman, but you’re just lying to yourself,” he said. “All this feminist nonsense won’t take you anywhere. It’s not part of our culture, and that won’t change because of you, so you’d better face reality.”

The shirt was for my mom, grandma and aunties.

Amidst the tears, a wave of anger washed over me. If that culture was the reason why my mom was absent when it was decided she would wed my father, the reason she had abandoned all her dreams, then I wanted no part of it.

Whenever my mom speaks about her childhood dreams, it’s with a tinge of regret. In many ways, I feel as though she lives vicariously through me. In me, she sees the woman she always wanted to be but was never allowed to become.

This shirt was for my mom, my grandma and my aunties: different women, the same story. I know that woman, I’ve heard her story and I refuse to become her. No woman should have to. Nothing, not even culture, can change that.

I said nothing in response to my dad. I was too sad. Too tired. I might have cried, but my beliefs hadn’t changed.

A week later, my dad summoned me to his room. “Take your property,” he said, gesturing towards a table where my shirt lay. He had gone back to get it.

I stared at it for a while before looking up to meet his gaze. I could sense the fear in his eyes. He seemed to be saying, “You had better know what you’re doing.”

I am part of a different generation.

I thanked him, took my shirt and walked out with tears in my eyes. He had listened. My dad, who should have been the hardest person to convince, had listened.

I now realise it was not out of place for him to be concerned about my safety in a society that is not receptive to open displays of views that many would consider delusional.

I am also a member of a different generation. I attend schools that my grandma could never have dreamed of attending, and I’m supported in pursuits that would have been considered far-fetched for a girl to pursue just one generation ago.

I am a dreamer, and my parents have always been ready to support my dreams. In opposing the shirt, my parents were doing what they felt was best for me.

The way society might regard me won’t stop me from being me. Eventually, like my dad, I hope they too will accept me.

(For more stories by students at the African Leadership Academy, click here.)

Fatima Ugbede Yunusa is a 17-year-old from Kogi State, Nigeria. She is committed to empowering marginalised populations, including refugees, persecuted ethnicities and, especially, women. Using makeup and styling, she likes to tell stories of Africa’s past, present and future.

Share This
African Leadership Academy We are here because of a shirt!