Northern Ireland has been peaceful for two decades. But tensions are building again as a power-sharing agreement teeters and Brexit looms. 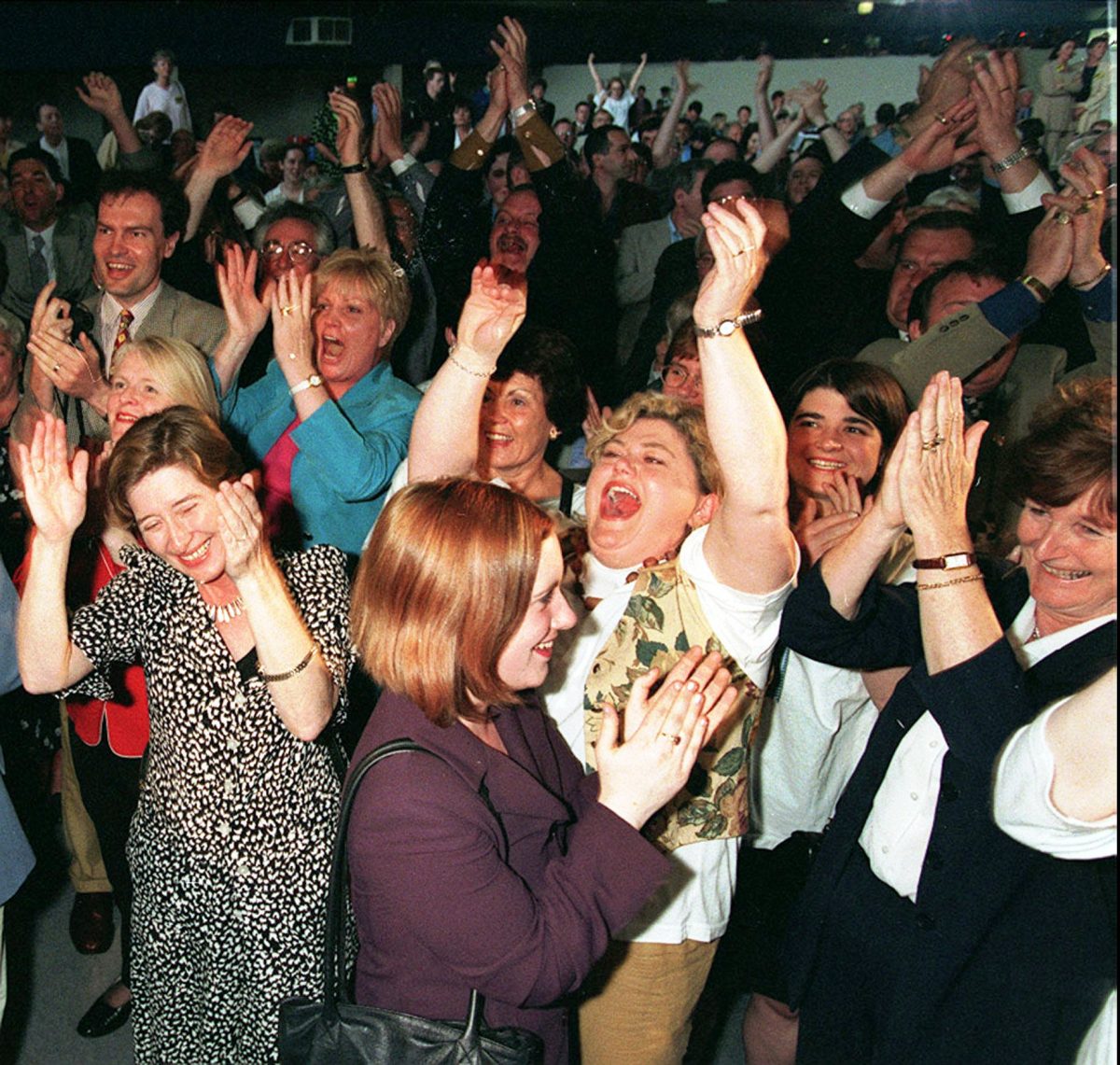 People celebrate in Belfast after the approval of the Good Friday Agreement, 23 May 1998.
(AP Photo/Pacemaker, Martin Wright, Pool)

One of Europe’s longest and bloodiest disputes has lain dormant for two decades. But tensions over Northern Ireland are building again as a power-sharing agreement teeters and Britain’s exit from the European Union threatens to impose a hard border dividing the UK province and its southern neighbor, Ireland.

Three decades of sectarian violence between Catholics and Protestants was muzzled in May 1998, when both parts of divided Ireland voted strongly for an agreement aimed at ending guerrilla warfare in the British-ruled North that had killed more than 3,500 people and injured nearly 50,000, a running sore at the heart of western Europe.

The historic agreement silenced the guns of the “Republican” activists among Northern Ireland’s Catholic minority, most of whom aspire to reunification with the Catholic Irish Republic in the south, and “Loyalists” from the Protestant majority determined to keep the province part of Britain.

But with the 20th anniversary of the Good Friday Agreement approaching, its future looks uncertain.

Northern Ireland’s main political parties, the republican Sinn Féin and the loyalist Democratic Union Party, are struggling to rebuild their joint government after the Republicans walked out in a dispute over rights to speak the Irish language and other issues.

The other main pillar of the treaty, an open border, is threatened by Brexit. If Britain leaves the European Customs Union, it could mean a “hard” border between the two parts of Ireland, a return to frontier guards and an end to 20 years of cross-border harmony.

The seeds of the sectarian divide in Northern Ireland go back centuries.

Although Christianity didn’t disseminate until after their deaths, missionaries like St. Patrick first arrived in Ireland during the 5th century. Through the establishment of monasteries, Catholicism slowly became Ireland’s dominant religion.

Meanwhile, the Anglican Church — a Protestant denomination — had become the national religion of Britain. After King Henry VIII subjugated the island in 1541, Britain’s rulers imported thousands of Protestants to Northern Ireland to strengthen their grip on the region.

This emigration in the 16th and 17th centuries supplanted many pre-existing Catholic landowners and was followed by centuries of discriminatory laws and practices against Catholics that drove a wedge of resentment between the two denominations.

Centuries of political unrest and rebellions followed until the abolishment of the Irish Parliament in 1801 in favor of direct rule from London. British inaction during the Great Potato Famine 40 years later, which killed or displaced millions of people, further undermined the relationship between the Irish and their rulers.

With Brexit, memories of a violent past may re-emerge.

In 1916, some Irish Republicans, disillusioned with the lack of progress in diplomatic severance with Britain, staged the “Easter Rising” by seizing several key positions in Dublin. Although their resistance was crushed by British forces, the uprising inspired many others to take up arms, culminating in the Irish War of Independence in 1919.

Two years later, the war-weary British drafted the Anglo–Irish treaty, which established the Irish Free State, later renamed the Republic of Ireland. However, as part of that treaty, six northeastern, Loyalist-majority counties voted to opt out, to continue on as part of the UK.

As time passed, relations between Republicans and Loyalists in these counties worsened, culminating in the emergence of guerrilla paramilitaries from both factions during the late 1960s.

There ensured three decades of violence called “The Troubles” — a conflict rooted in a complex mix of politics, culture and religion.

Republicans were generally Catholic and Loyalists most often Protestant, although there was crossing over and religion was never the sole catalyst.

Still, Loyalists looked at the Irish Republic, where contraception and divorce were banned until the 1980s, as an example of the pervasive power of the Catholic church to control everyday lives.

And education in Northern Ireland remained heavily segregated, with most pupils taught in separate faith schools from the age of five, reinforcing divisions between the communities.

The Good Friday Agreement of 1998 aimed to put an end to The Troubles. It stipulated that Northern Ireland’s devolved government must be led by a coalition between its largest Republican and Loyalist parties. Yet that agreement is fragile.

With Sinn Féin refusing to rejoin the coalition until its demands are met, Britain may soon be forced to resume direct rule.

Now with Brexit looming, and with it the possibility of a controlled border between Northern Ireland and the Republic, many believe that memories of a more violent and unequal past may re-emerge.

Much of the success of the peace accord is due to the open collaboration between industry and politics across all parts of the island.

But a hard border could effectively shatter those partnerships, literally and figuratively placing a wall between those who still wish to unify with the rest of the Republic and those still loyal to the UK.

Share This
DecodersNorthern Ireland: A political volcano inside Europe