The U.S. heartland — “flyover country” — is sending surprising signals about the presidential election and disenchanted voters. 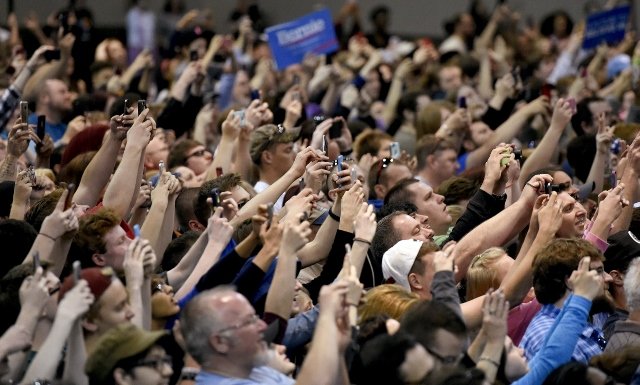 At a rally for Bernie Sanders, Evansville, Indiana, 2 May 2016
(Jason Clark/Evansville Courier & Press via AP)

Exit polls from West Virginia’s presidential primary this month revealed a surprise: Many voters who had opted for Democrat Bernie Sanders said that, should he fail to win his party’s nomination, they would likely support Republican Donald Trump in November’s U.S. election.

That sentiment left pundits along the country’s East and West coasts scratching their heads. But it makes perfect sense in middle America, a region derisively called “flyover country” by those who pass over it while traveling between the East and West coasts.

In fact, West Virginia’s voters repeated on May 10 the dramatic result of Indiana’s own primary election that had taken place the week before.

Set in America’s heartland, Indiana normally would not have generated election results worthy of more than a throwaway line in national political reports.

But when “Hoosiers” — residents of Indiana — ended up supporting Bernie Sanders over Hillary Clinton, or Donald Trump over his opponents, the consequences of these choices reverberated big time.

Indiana offers a glimpse into the American electorate at large.

Indiana’s not a usual player in America’s national politics. This time, however, the state offers a glimpse into the American electorate at large, away from the media echo chambers along the East and West coasts.

First, it’s post-industrial but not yet high tech. Indiana’s industrial glory days are long past, and while poised for growth in high-tech industries, it hasn’t excelled there yet.

Longing for the stability of the past while seeking a sustainable future, Indiana’s primary voters supported candidates who talked plainly about the issues citizens really care about including trade deals, immigration and the future of the country.

Second, glance at a map of the U.S. Interstate Highway system and it’s clear that Indiana is literally at the crossroads of America.

Indiana may officially be in the East North Central region, but linguistically some native Hoosiers sound like they come from the U.S. South.

The state’s politics can reflect these same conflicted identities. With its relatively large evangelical population, Indiana held promise as a bulwark for Trump’s closest rival for the Republican nomination, Ted Cruz.

But the promise of social conservatism didn’t placate voters with more immediate concerns.

Trump preaches to the disillusioned choir when he talks about outsourced jobs, porous borders and his desire to “make America great again.”

That message outweighed any questions about his views on abortion, same sex marriage or other social issues.

Both Sanders and Trump are the anti-establishment candidates.

Take Monroe County, home to one of the state’s flagship institutions of higher education, Indiana University — and also to Indiana’s highest poverty rate.

Sanders taps the idealism of younger voters, harnessing their frustrations about the growing gap between “haves” and “have nots.” Hours before Sanders arrived to speak at Indiana University, a line of voters stretched across campus, proof of his popularity.

You might not expect a Venn diagram marking the positions of Trump and Sanders to illustrate much common ground. But a closer look demonstrates what they have in common: a variant of antiestablishmentarianism.

By supporting insurgent candidates in both major political parties, Indiana’s voters demonstrated that they share their compatriots’ declining confidence in institutions as documented in a Gallup poll last summer.

Trump taps into “deindustrialization and despair.”

That poll found decreased public confidence in everything from the criminal justice system to political institutions.

Thomas Frank, a political analyst and historian, noted recently that support for Trump coincides less with racist tendencies, as often portrayed in the press, and more with the “deindustrialization and despair” that has followed free trade agreements.

Frustrated with institutions and tired of voting for candidates who promise one thing but deliver another — or nothing at all — Indiana’s voters put an exclamation point on the national trends that have defined this presidential primary season.

On primary election day, Hoosiers found themselves at the center of a battle for the future of the United States. And when it was over, everything had changed, proving the folly of dismissing flyover country and its utility as an indicator of national sentiment.